Planning Minister: Region's crises will not be solved through taxes

Planning Minister: Region's crises will not be solved through taxes 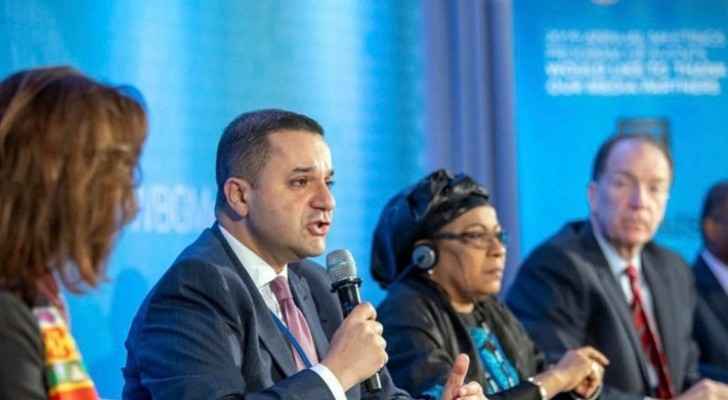 The annual meeting of the World Bank (WB) was held today, with the participation of the Jordanian Minister of Planning and International Cooperation and Minister of State for Economic Affairs, Mohammad Al-Issis as a keynote speaker in a high-level dialogue.

During the meeting, Issis said that the effects of regional crises that negatively affect the Jordanian economy cannot be solved at the expense of the Jordanian citizen and there is no alternative to stimulating the economy to grow and create jobs to meet these challenges.

Issis added that the best way to reduce poverty and achieve economic growth is by creating jobs for youth, as Jordan has maintained growth rates at 2 %, despite the crises and challenges it has faced during the past decade due to regional instability.

The Minister also called on the WB, the International Monetary Fund (IMF) and the international financial institutions to focus on growth and job creation and to avoid tax solutions to address the economic imbalances arising mainly from the slowdown of the economy, stressing the importance of finding balanced solutions to reduce the fiscal deficit and provide opportunities for the economy to grow.

In this context, he also called on creating a balance between financial stability and economic growth to ensure Jordanian youth have access to jobs and hope for a promising future.

On the other hand, the Minister participated in a panel discussion within the activities of the Middle East and North Africa Day during the annual WB meetings currently held in Washington, as a keynote speaker along with the Egyptian Minister of Investment and International Cooperation Sahar Nasr and a number of senior WB economic advisors, where they discussed the new package of reforms in the MENA region focused on competition, growth and jobs.

The Minister highlighted the importance of investing in vital sectors that provide high-quality service jobs, skills development and employment for Jordanian youth, which contribute to economic growth, as the Kingdom has the competitive advantages compared to the region's countries, in particular, the sectors of information technology, therapeutic tourism, and education technology.

In a separate meeting, the Minister also discussed with the President of the European Bank for Reconstruction and Development (EBRD) Suma Chakrabarti, priorities of supporting the Jordanian government during the next phase, especially the partnership between the public and private sectors, which is one of the most important priorities of the Jordanian government aimed to achieve economic growth, create more jobs, and better services for citizens.

Chakrabarti announced the Bank's intention to provide support to Jordan to contribute to the establishment of the recently launched Public-Private Partnership Development Fund, and also discussed the priorities of the EBRD's strategy for Jordan for 2020-2025, which is still under preparation, in a bid to increase the size of the bank's investment portfolio in the Kingdom.

During the meeting, Issis thanked the EBRD for its continued support to Jordan through investment in various fields.

On the sidelines of his participation in the annual meetings of the World Bank, the minister met with USAID Deputy Director Bonnie Glick, where they discussed the priorities of the Jordanian government for the next phase, in addition to discussing the main priority sectors of the Jordanian government, which the USAID intends to implement development projects during the next stage, most notably the sectors of water and sanitation, education and health.