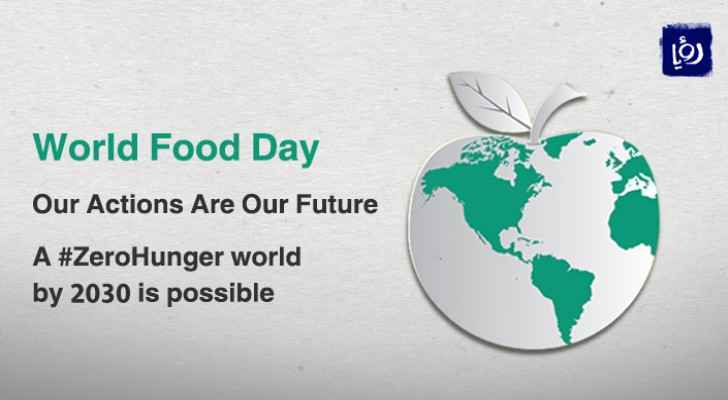 Jordan joins the world today in celebrating World Food Day that falls on October 16th each year as an opportunity to demonstrate the commitment to sustainable development and the eradication of hunger by 2030.

The World Food Day aims to promote global awareness and action for people who suffer from hunger and other forms of malnutrition, ensure food security and healthy nutrition, and raise awareness of the importance of individuals adopting healthy diets.

This year's theme is "Our Actions Are Our Future. Healthy Diets for A #ZeroHunger World."

Obesity and other forms of malnutrition affect nearly one in three people, according to the Food and Agriculture Organization of the United Nations.

Projections indicate that the number will be one in two by 2025. The good news is that affordable solutions exist to reduce all forms of malnutrition, but they require greater global commitment and action.

A combination of unhealthy diets and sedentary lifestyles has sent obesity rates soaring, not only in developed countries but also in low-income countries, where hunger and obesity often coexist. Now over 670 million adults and 120 million girls and boys in the world (5-19 years) are obese, and over 40 million children under 5 are overweight, while over 820 million people suffer from hunger.

Based on a study conducted by the World Bank on this occasion, around 12% of Jordanians suffered from malnutrition in 2017, the Jordanian Higher Population Council announced.

Results of the Population and Family Health Survey 2017-2018 showed that 32% of children aged between 6-59 months and 43%of females aged between 15-49 years suffer from anemia.

11 Facts to know about refugees in Jordan on World Food ....