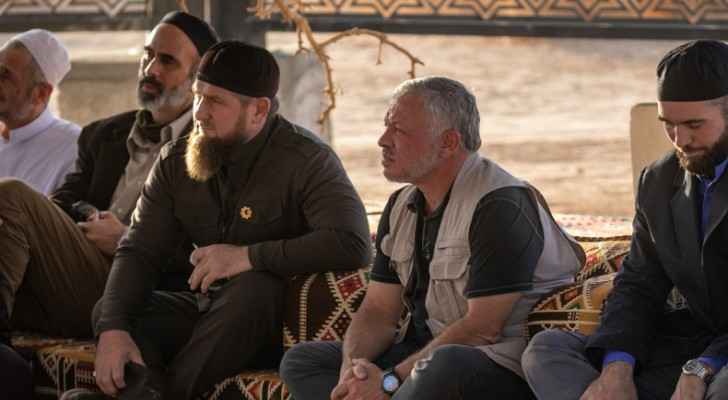 His Majesty King Abdullah, accompanied by Head of Chechen Republic Ramzan Kadyrov, inaugurated on Wednesday, October 9, 2019, the visitor center at the site of the Blessed Tree in Safawi, where Prophet Mohammad, peace be upon him, rested on his way to Syria.

The Blessed Tree, estimated to be 1,500 years old, is a religious and historical site in Jordan affiliated with the Ministry of Awqaf and Islamic Affairs, while a Royal committee that administers and restores Islamic shrines oversees the site.

King Abdullah gave the head of the Chechen Republic a tour of the pond adjacent to the site of the Blessed Tree.

Prince Hashim delivered remarks, thanking His Majesty for attending the ceremony and for supporting efforts to maintain the Blessed Tree site, as well as other historic and religious sites around the Kingdom.

The site of the Blessed Tree is a historical and religious landmark that should be publicized and given the attention and care it deserves, the Prince said, noting that Prophet Mohammad, in his youth and on the way to Syria, rested in the tree’s shade, where he met the Christian monk Bahira who foretold his role as a prophet.