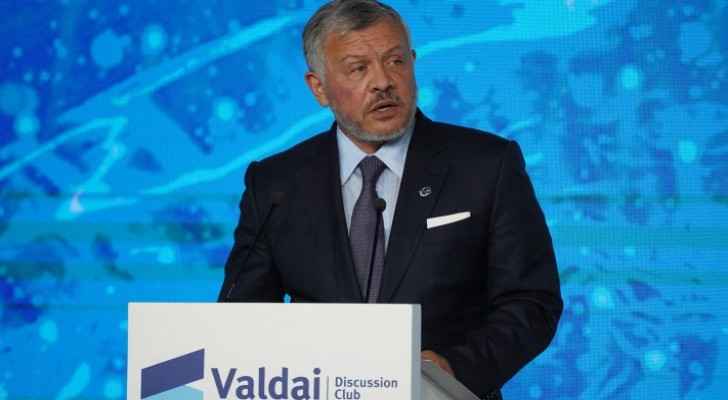 His Majesty King Abdullah participated on Thursday, October 3, 2019, in the 16th annual meeting of the Valdai Discussion Club.

In the speech, His Majesty examined a number of issues facing the region, including the Syrian crisis, saying, “Jordan has worked closely alongside Russia, the US, and other international partners to stabilise the situation in southern Syria”.

“The end to this crisis will come only with a political solution, one that preserves Syria's unity, sovereignty, and territorial integrity, and enables the safe and voluntary return of refugees,” the King reaffirmed.

In the meantime, His Majesty said Jordan continues to bear a massive refugee burden, alleviating the impact on other regions.

“But the refugee situation remains costly and dire,” the King said.

Turning to the Palestinian-Israeli conflict, His Majesty said Jordan and Russia agree on the urgent need for a two-state solution.

“Our region will not enjoy broad security and stability until the Palestinian-Israeli conflict ends,” the King noted.

“After 70 years, it is clear that peace in the Holy Land cannot be achieved by unilateral fiat or violence; it cannot be imposed by land grabs and walls against one's neighbours; it cannot come by flouting international law and equal human rights,” His Majesty warned.

“The alternative to a two-state solution is a bi-national state and an unthinkable, undemocratic regime of unequal laws. We need to take a better, more effective path. And that is something we all have a vital role in delivering,” the King said.

His Majesty stressed that Jordan and Russia continue to share a deep understanding of the need for active, practical collaboration to achieve regional and global peace.

Noting Jordan’s vision and role, the King said, “Our country's stability and moderation, and our globally-connected, highly motivated young population, have helped us build partnerships worldwide.”

Jordan’s partners also share its critical interest in resolving crises in the Middle East, His Majesty added, noting that the extremist threat from the khawarej, the outlaws of Islam, and also from Islamophobic and racist extremists is a danger to every region.

In 2009, the King said the Valdai Discussion Club held a meeting on the Middle East in Jordan. The theme of the conference was "The Middle East 2020: Is a Comprehensive Settlement Possible?"

“My answer today is yes; despite all the difficulties, comprehensive peace is possible—and not only possible, but necessary. But it will only happen with your help,” His Majesty concluded.

The Valdai session also featured some questions to the main speakers.

Answering a question on how to respond to extremists and terrorists, the King reiterated that the challenge is a third world war by other means.

“This is a challenge that is going to take the next decade or so to overcome. And this is one that actually brings us all together,” His Majesty noted.

In addition to being a war inside of Islam against the khawarej, the outlaws of Islam, it is also a global challenge, not just in Syria or Iraq, but also in Libya and with Boko Haram and Al Shabab, the King said.

His Majesty added that Jordan is working closely with countries in Europe, the Balkans, and with the Philippines on counter-radicalisation, stressing that all religions must come together in this fight.

What binds the monotheistic faiths together are the commandments to love thy God and love thy neighbour, the King reiterated, noting that he has discussed with President Putin “how do we come together as religions and nations to fight this scourge”.

Another challenge is Islamophobia, His Majesty said, and “sensible minds around the world need to know that we need to come together and build on the common ground between all of us”.

The challenge is that “a lot of the world does not understand what the threat is, and that is problematic for all of us”, the King warned.

His Majesty underscored the importance of Jerusalem as “a city that should unify us all together as a symbol”.

Responding to a question on the role of the Middle East in the future world order, the King said the challenge over the next decade or two is the counter-radicalisation challenge, moving from being a security response to targeting “hearts and minds”.

“The international community still does not understand what the enemy is, and unless we understand the challenge… [it] will continue to create insecurity for the whole world,” His Majesty warned.

“So unless we all call the enemy for what it is and work together, then the global challenges are going to be much worse,” the King underscored.

His Majesty noted that Jordan and Russia understand the threat and “have always been honest with each other to be able to deal with these challenges”.

“Unless we understand that we are all on the same side, and understand the threat, then it is going to take a long time for us to stabilise this world,” the King affirmed.

Speaking at the Valdai session, President Putin stressed the need to respect international law and to pursue inter-state relations in line with the UN Charter, highlighting Russia’s commitment to coordinating with countries in the region over the Syrian crisis.

Founded in 2004, the Valdai Discussion Club seeks to promote the conversation between leading political, academic, and media experts around the world, and to examine political, economic, and social developments in Russia and world.

This year’s meeting featured the participation of over 150 political, academic, and media experts from countries around the world.

Earlier on Thursday, His Majesty attended a luncheon hosted by President Putin in honour of the King and the heads of state attending the Valdai forum.