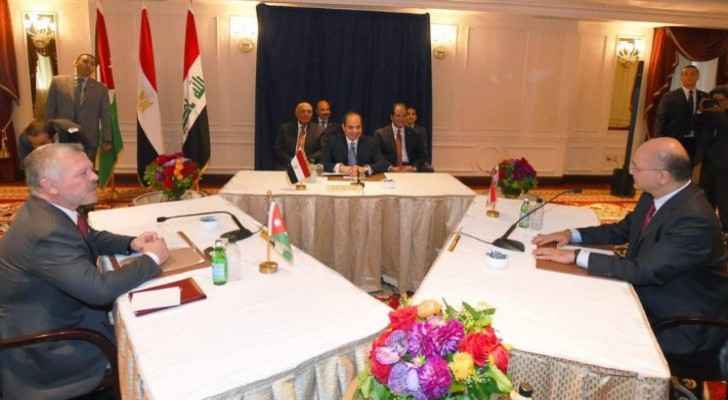 His Majesty King Abdullah, Egyptian President Abdel Fattah El Sisi, and Iraqi President Barham Salih held a trilateral summit in New York on Sunday that focused on the importance of bolstering coordination among the three countries.

The summit, attended by senior officials from the three countries, covered means to enhance economic, trade, and investment cooperation to serve mutual interests and Arab causes.

King Abdullah welcomed holding the next ministerial meeting among the three countries in Amman to follow up on progress in cooperation.

The summit was held on the sidelines of His Majesty’s visit to New York to attend the 74th Session of the General Assembly of the United Nations.

At the conclusion of the summit, the three countries issued a joint communique, which highlighted the topics discussed by the three leaders, including means to bolster cooperation and coordination, as well as regional challenges.

The three leaders reaffirmed their support for a comprehensive political solution to the Palestinian cause that guarantees the rights of the Palestinian people, foremost of which is their right to an independent, viable Palestinian state with East Jerusalem as its capital, based on the two-state solution, international law and relevant UN resolutions, and the Arab Peace Initiative.

The leaders said resolving the conflict is the only way to ensure peace in the region, urging the international community to take action to put a stop to the building and expansion of illegal settlements, as well as all unilateral measures aimed at changing the historical and legal status quo in Jerusalem and its Islamic and Christian holy sites.

They called for condemning any attempt to annex occupied Palestinian land.

Stressing the importance of building on the victories against terrorism, the leaders called for reaching political solutions to regional crises.

The three leaders expressed solidarity with Saudi Arabia in dealing with the attacks on its oil facilities, stressing the importance of maintaining maritime security in the Arabian Gulf.