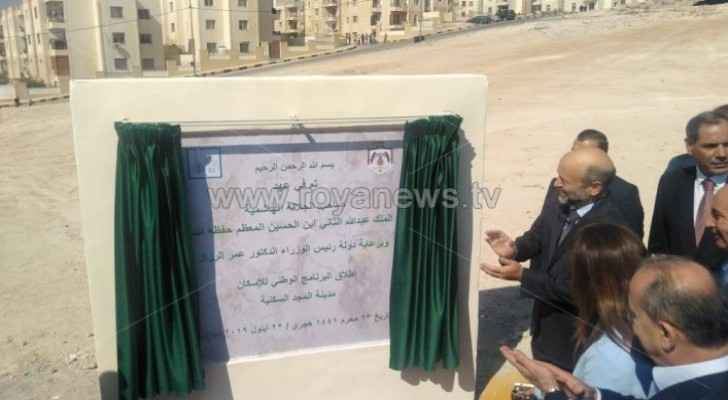 Prime Minister Omar Razzaz has visited Zarqa governorate on Sunday, September 22, 2019, with a number of ministers.

During his visit, Razzaz launched the National Housing Program through the Housing and Urban Development Corporation.

Prime Minister said that this project came to support young people and families with limited income, adding that this project which would open up investment opportunities and increase the number of Jordanian labor.

He added that this project is based on a premium system which would help low and middle-income groups of people,  who receive a monthly salary of JD 400 - 700 to buy houses.

The program includes the implementation of residential communities with full services, in addition to the sale of residential plots in several governorates of the Kingdom, the first of which is Al Majd residential city in Zarqa.

The implementation of the program comes through two axes. The first involves establishing small residential communities with full services for low and middle-income people on lands as part of Urban upgrading, where approximately 900 apartments will be built in Amman, Karak, Tafilah, Zarqa and Mafraq in partnership with investors in the private sector, where each apartment will be 100-120 square meters.

The second axis will include the sale of 1,700 residential plots in most of the Kingdom's governorates.

The program will be implemented in several phases, the first of will be in Al Majd residential city.

During his visit, Razzaz is expected to visit King Abdullah Bin Abdulaziz Al Saud city, the Jordanian Korean Institute for Technology and the Osama Bin Zeid Juvenile Centre in Russeifa.