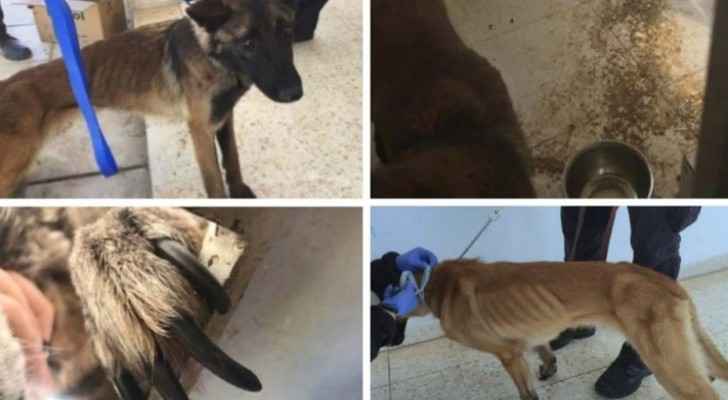 Mencey, a pointy-eared, caramel-colored Belgian Malinois, was ready to sniff out bombs when he arrived in Jordan in July 2017.

The 3-year-old did not get much of a chance. Mencey was bombarded with ticks and sandflies while under Jordanian care, and he was evacuated back to a facility in Virginia. A vector-borne disease ravaged his body. His kidneys failed. And less than a year after he left, Mencey was euthanized at the same facility where he trained to help secure a country that ultimately killed him.

The State Department sent dozens of highly skilled explosive-detection dogs to Jordan, even after the agency assessed a high degree of mistreatment and failure to care for the animals in 2016, according to an inspector general report concluded last week. It ultimately led to their early deaths and crushed their spirits so brutally that the dogs “lost the will to work,” the report says.

At least 10 dogs provided to Jordan died of “various medical problems” out of at least 100 canines sent there between 2008 and 2016, the report found, and surviving dogs were starved in kennels smeared with feces and dirt. Dogs were overworked in the desert, suffered hip dysplasia and other conditions. Engorged ticks ringed their ears.

Zoe, another Belgian Malinois, died of heat stroke on the Syrian border in 2017, less than a year after her arrival. Veterinarians told investigators that such deaths are not accidental and pointed to negligence on the part of Jordanian handlers.

The report reveals an alarming and fast collapse of dogs that arrived healthy and strong in Jordan, only to be fighting for their lives in a matter of months.

Mencey and Zoe were both dead before they marked a year of work. Athena, a 2-year old Belgian Malinois, was found starved in Jordan by U.S. dog handling officials and evacuated to the United States for recovery.

Photos in Jordan show Athena’s malnourished body. Feces covered her kennel floor, her water bowl bone-dry. The State Department had two full-time dog handling mentors on the ground “during the entire time” Athena was in Jordan, the report found, but her condition did not set off any alarms until a site visit in April 2018.

By then, the State Department knew for two years — after an April 2016 site visit — that Jordan was unable to adequately care for and protect dogs carrying out dirty, hot and dangerous work to find explosives in violent places like the Syrian border.

Yet at least 60 dogs arrived in six waves through 2018 after the assessment, the report found, including Mencey, Zoe and Athena.

The site visit to a Jordanian police facility concluded that dogs were under constant threat of parvo, a deadly gastrointestinal illness, and were worked well past their retirement age, the report found.

“The police are losing canines frequently to the disease and do not have the medical care required to treat it, or even maintain healthy canines,” officials wrote in their assessment. “The training observed was well below the needed methods to maintain a minimal standard.”

Several canines had hip dysplasia and arthritis, they wrote, “and have lost the will to work.”

A visit to another facility revealed other bleak conditions. “The teams are additionally over worked, and required to search large numbers of vehicles without proper shelter, sanitation, and care,” the officials wrote.

“The funds we provide to help countries like Jordan locate and remove unexploded bombs has saved countless lives,” Leahy told The Washington Post. “Bomb sniffing dogs are indispensable to that process, they cost a lot of money to train, and their lives are put at risk every day in the field. It is imperative that they are properly cared for.”

The State Department has sent explosive detection canines to partner nations for two decades, relying heavily on dogs provided and trained by the Bureau of Alcohol, Tobacco, Firearms and Explosives. In 2016, the State Department established its own facility, the Canine Validation Center, in Winchester, Va., staffed by contractors, the report said.

A 30-day foreign handler course for 15 trained dogs costs approximately $450,000, including the provisions of those animals, the report said.

In a statement, the State Department said it has taken action on four of the five recommendations made by investigators, including more clearly defined operating procedures and agreements on canine care and treatment.

The agency said it provided written strategic health and welfare plans to Jordan as part of the recommended actions, though it did not provide any proof to investigators, the report said.

A State Department official declined to say if it was confident in the safety and welfare of dogs bound for Jordan in the future.

The agency also disagreed with the investigative recommendation that the program should be halted in Jordan to implement plans to ensure the health and welfare of the animals.

It responded in the report that it could not halt the program because of “national security related efforts focused on protecting American interests” and because “assisting Jordan in combating active terrorist threats would be negatively impacted by such a move.”

Investigators balked at that defense, suggesting that mistreatment harmed their ability to detect threats in the first place.

“Canines lose their effectiveness when their quality of life is poor,” the report said in response.

But no one really knows exactly how many because of “insufficient and contradictory documentation,” the report found. Dogs were also provided to the Dominican Republic and Afghanistan, but the program “does not maintain documents related to the welfare of dogs in Afghanistan.”

Agency officials said in the report that it has improved focus on canine care, and in 2018, sent a veterinarian and a veterinary technician to Jordan for a year at a cost of $540,000. Other handler/mentor deployments will cost millions.