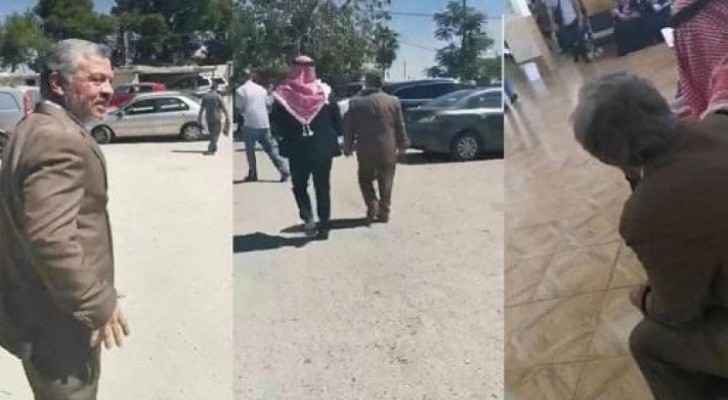 Dressed in an oversized suit and coming off as a man beyond his years, His Majesty King Abdullah appeared without guards in photos taken during his recent undercover visit to the north Amman Department of Land and Survey, the Jordan Times reported.

A few days after the King sought to get a first-hand look at the quality of services provided to the public, Royal Hashemite Court Chief Yousef Issawi and Minister of Finance, Ezzeddine Kanakiria paid a visit to the Department to follow up on His Majesty’s remarks regarding what he observed at the public institution.

This is not the first time His Majesty has gone undercover.

In 2009, His Majesty made a covert visit to the Health Ministry's Department of Patients Affairs to check on the quality of services offered to beneficiaries and would-be beneficiaries.

King Abdullah had also posed as a TV reporter, a taxi driver and as an elderly man to check what life is like for citizens at various public agencies.

News outlets reported that during King's visit to the Department of Land and Survey, he listened to the concerns of citizens and the Department’s employees.

In the photos, King Abdullah appears to be sitting along with other visitors to the Department as the employees proceed with their daily routine.

In another photo, His Majesty, wearing a loose beige suit, is seen walking in what appeared to be the institution’s parking lot beside an elderly man wearing a black suit and a hatta (a national head cover worn by men), with no guards in the vicinity.

During the visit to follow up on His Majesty’s remarks, Issawi said that the issues that His Majesty pointed out during his undercover visit will be addressed to guarantee quality services to citizens.

He highlighted the importance of improving the general condition of the Department within a fixed time frame, calling for finding an immediate solution to delays and hurdles in evaluating the prices of real estate, which mainly depend on the "mood of employees."

The King was also seen walking in the Department’s parking lot in another photo, showing more wrinkles and an older appearance than usually perceived.

His Majesty has always underlined the need for officials to conduct field visits to the country’s various institutions to ensure the provision of quality services for Jordanians.