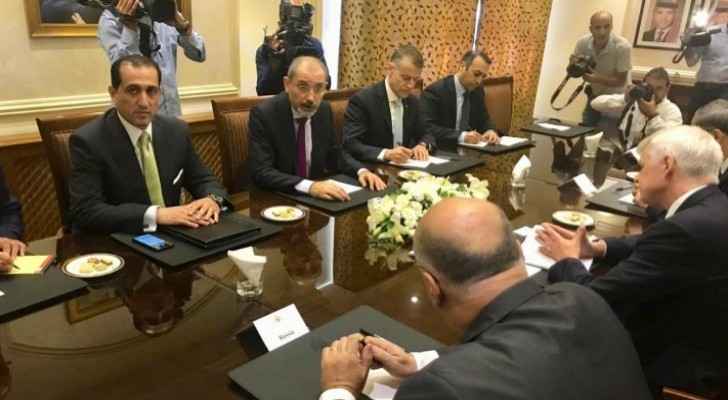 Jordanian Minister of Foreign Affairs and Expatriates, Ayman Safadi met on Thursday, September 12, 2019, with the ambassadors to the Kingdom of the five permanent members of the United Nations Security Council (UNSC).

The meeting was held to urge the international community to act "effectively" and "quickly" to counter Prime Minister Benjamin Netanyahu's announcement of his intention to annex Israeli illegal settlements in the occupied Palestinian territories and to impose Israeli sovereignty over the Jordan Valley and the northern Dead Sea.

During the meeting, Safadi stressed the need for the Security Council and the entire international community to take "a clear and unequivocal" stance in order to condemn the annexation announcement, to reject this flagrant violation of international laws and international legitimacy resolutions as a dangerous escalation that undermines the foundations of the peace process, pushes the whole region towards violence, and fuels conflict.

Safadi briefed the ambassadors on the "disastrous" repercussions of the Israeli announcement and the efforts made to achieve lasting peace in the region.

He added that Netanyahu's pledge, if implemented, would undermine the two-state solution, which is the only way to resolve the conflict and end the peace process.

In this context, Safadi affirmed this announcement will perpetuate an atmosphere of despair that will spark anger and violence, which will threaten peace and security in the whole region.

Discussing means to stop Netanyahu's pledge, Safadi urged the permanent members of the Security Council to take the necessary steps in order to prevent the implementation of this announcement and to confront Israel's unilateral illegal actions, in order to protect international law and the right of all the region's peoples to live in peace and security.

On the peace process, Safadi also called for action to launch a real effort to resolve the conflict on the basis of a two-state solution that guarantees the establishment of an independent Palestinian state with Jerusalem as its capital on the June 4, 1967 lines, which is the only way to achieve peace.

Safadi stated, "This Israeli declaration and other unilateral steps, which include the expansion of illegal settlements and the violations by the occupation authorities of the holy sites in Al-Quds Al-Sharif, represent a "serious" threat to security and peace in the region and the world and require a decisive and clear international stand that stops what Israel is doing to undermine the peace process and threatening peace and security."

The meeting aimed at building a firm international stance to face the Israeli Prime Minister's announcement in the context of intensive diplomatic moves led by His Majesty King Abdullah II to support the Palestinian people and to drum up international support to back their right to freedom and statehood on their national soil.