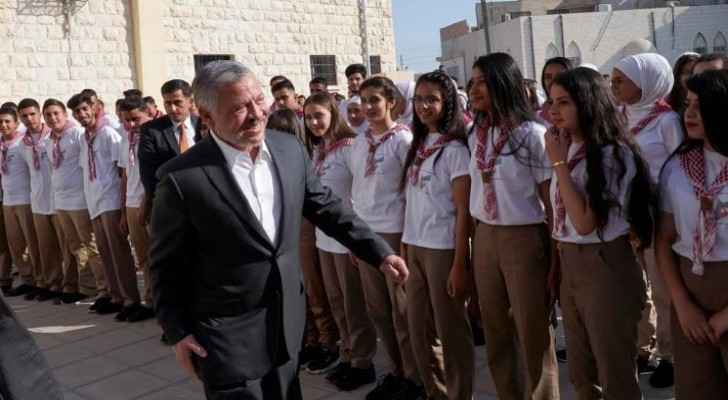 His Majesty King Abdullah II attended the school morning queue at Al Hussein Secondary School for boys in Amman, on the first day of the new school year, Sunday, September 1, 2019.

Upon his arrival to the school, His Majesty was received by the Minister of Education and Minister of Higher Education and Scientific Research, Dr. Walid Maani and the Director of the School, Dr. Alaa Al-Da’ja.

His Majesty greeted the students and addressed them, saying: "You are the hope and the future. Our homeland is waiting for your giving. I wish you all good luck in the new school year."

The morning queue began with the national anthem, where the Jordan flag was raised, after which verses from the Holy Quran were recited.

A number of students from Al Hussein Secondary School for Boys as well as female students from the Scouts and Guides Association of Jordan at the Ministry of Education recited a poem entitled "Anthem of a Homeland."

Al Hussein Secondary School for Boys was founded in 1920. In 1949, a Royal Decree was issued by the late King Abdullah I bin Al-Hussein to name the school after Sharif Hussein bin Ali.