Photo taken from the blast scene in Rainbow street 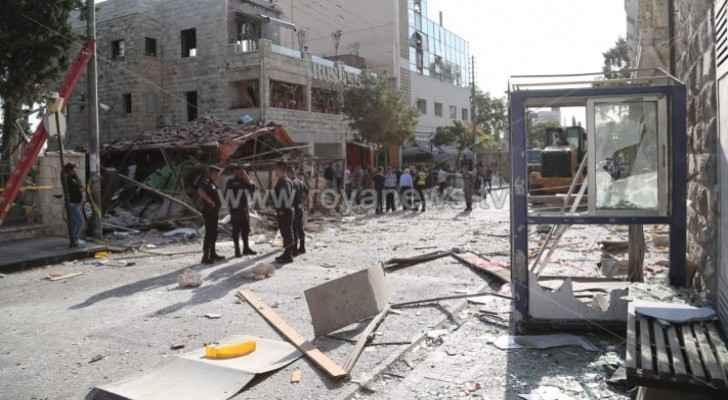 Within less than 60 days, three restaurants caught fire due to such accidents, the first of which was on March 7, 2019, where a gas leak caused an explosion inside a restaurant in Amman, resulting in one death.

The second was on August 20, 2019, as another gas cylinder explosion occurred inside a restaurant in Al-Madina Al-Monawara street, resulting in one injury.

The most recent of which took place inside a restaurant in Rainbow street/ Jabal Amman yesterday, August 28, 2019. The restaurant was fully damaged and caused damages to the nearby shops. In addition, it left one police officer injured.

However, on February 22, 2019, a gas cylinder had exploded in Al-Khalidya area of Mafraq, causing injuries to 12 people.

On March 15, 2019, a gas cylinder had exploded inside a house in Hanina village of Irbid, causing fire and leaving three people injured.

A gas cylinder blast caused a house fire on March 25, 2019, in an area of the Kingdom, leaving a number of people injured.

In addition, in two separate accidents, two gas cylinders exploded, where one of them took place in Irbid governorate. The two blasts left a number of people injured.

In another accident, a vehicle loaded with gas cylinders in Sweileh had exploded, leaving one injured and causing two other vehicles to catch fire.