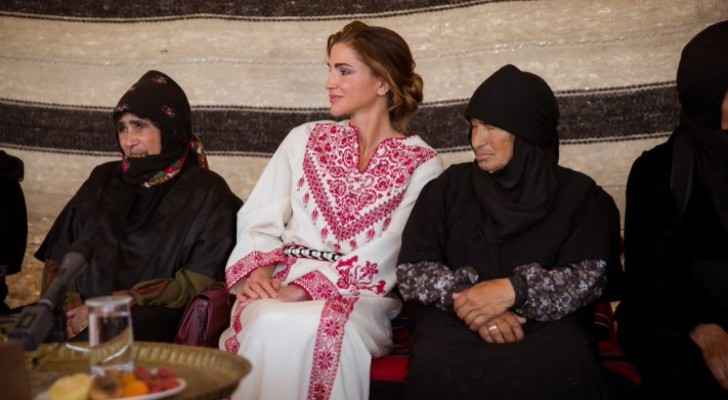 Her Majesty Queen Rania Al Abdullah visited Umm Ar-Rasas District in Amman on Wednesday and met with members and beneficiaries of its women’s cooperative society.

Her Majesty’s visit included a tour of the Umm Ar-Rasas Visitor Center where she stopped by a clay production workshop run by a beneficiary of the society’s vocational training program, a souvenir shop, and the center’s cafeteria and kitchen.

Accompanied by Director of the Um Ar-Rasas Women Cooperative Society, Dr. Maha Almor, Queen Rania heard from women who are receiving support from the cooperative to create income-generating projects and become financially independent.

During the discussion, Her Majesty reflected on how Jordanian women are known for their resilience and strong determination to achieve their goals. She also commended Dr. Almor, describing her as the archetype of the hardworking Jordanian woman.

The Queen reminded the beneficiaries that when women empower each other, they act as role models, supporters, and friends to each other.

“You are setting a positive example of a productive and self-empowered community, and your track-record of accomplishments reinforces my faith in your projects and the need to support them,” she told them.

“You have worked hard, innovated, and utilized the opportunities available in Umm Ar-Rasas, then created successful projects by forging a link between those opportunities and your own skills and abilities,” she added.

Dr. Almor expressed her delight in Queen Rania’s visit and its huge role in motivating the society to achieve more, describing Her Majesty as the number one supporter of women in Jordan.

A number of local community members were also present at the meeting as well as District Mayor, Ahmad Al Salaita.

Among its other undertakings is a family support and guidance program, training programs in traditional handicrafts and marketing, small project management, and a revolving loan fund project.

Jordan is home to so many incredible women serving as role models in every field! From my meeting today with members of the Umm Ar-Rasas Women Cooperative Society, which supports other women living in the Jordanian Badia and empowers them to launch small businesses pic.twitter.com/ZsjfSkb0wG