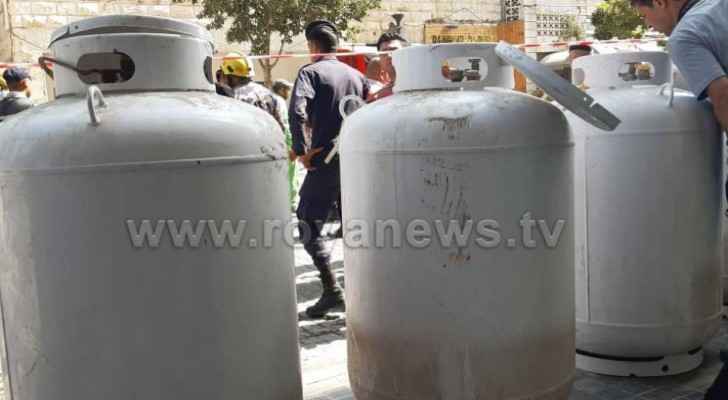 Following the gas cylinder explosion that took place inside a restaurant in Rainbow street/Jabal Amman this morning, the Director-General of the Jordan Institution for Standards and Metrology, Yousef Al-Shamali confirmed that gas cylinders are not allowed to be used or imported to the Kingdom, unless they go under laboratory testing, accredited internationally and done by the Institution at the Royal Scientific Society (RSS).

Al-Shamali affirmed that all previous cylinder explosion accidents were caused by misuse or gas leak, expressing the readiness of the Institution to follow up on any complaint received on the cylinders through its cadres.

In a statement to Roya, Al-Shamali added that the cylinders are always checked and tested in the mechanics laboratories of the RSS before they are used.

Cylinders are tested according to the Jordanian technical regulation (1864/2009), similar to the accredited European standard (1442).

The gas cylinders' valves are also tested according to Jordanian technical regulation (1924/2011) similar to the international standard approved by the International Organization for Standardization (15995).

He added that no cylinder is allowed to be imported unless it complies with the Jordanian technical regulation.

Al-Shamali pointed out that the Jordan Institution for Standards and Metrology directly supervises all the cylinders' tests through its representatives, to ensure that no cylinder is used before it goes under tests accredited nationally and internationally, for the safety of citizens.

"The last batch of cylinders imported was in March 2018 and was examined, where it was found in conformity to the Jordanian technical regulation," he explained.

The Jordan Institution for standards and Metrology conducts regular inspection tours on gas cylinders filling stations, main gas cylinders distribution centers, gas cylinders pickups to ensure the safety of the cylinders, their valves and the weight of gas in the.