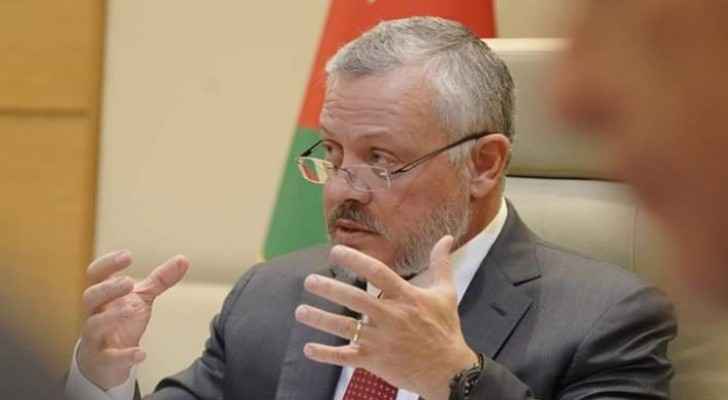 His Majesty King Abdullah, chairing part of a Cabinet meeting at the Prime Ministry on Monday, August 26, 2019, stressed the need for the government to implement its strategic projects to improve the public’s living standards, within a set timeframe.

King Abdullah emphasized the need for the government to publicly announce the completion dates of its projects, transparently clarify its working methods, and explain its plans and programs to citizens, urging tangible results before the end of the year.

During the meeting, His Majesty stressed the importance of continuing to support small and medium-sized enterprises led by youth, as well as employment for young people, highlighting that empowering young Jordanians will have outstanding results, since youths always make Jordan proud.

Moreover, the King directed the government to develop a program to support and finance higher education students, especially those majoring in specialties on demand in the labor market.

His Majesty underscored the need for officials to be boldly decisive, calling for activating coordination and cooperation with the private sector to move forward in supporting and strengthening domestic investment as well as attract foreign investors.

The King urged the government to accelerate the implementation of projects underway and seize the available opportunities, noting that some government decisions affect local and foreign investors alike.

Placing barriers instead of facilitating investment affects Jordan’s reputation and the desired course of economic prosperity, His Majesty stressed.

The King told the government that he is closely following the development of the investment ecosystem in the Kingdom, urging results before the end of the year.

The King emphasised the importance of encouraging Jordanian expatriates to invest in the Kingdom by drafting the required laws and regulations, calling for capitalising on promising economic opportunities in various sectors, such as e-commerce, so that Jordan becomes a regional hub for this sector.

His Majesty urged the government to move forward in the e-government project to provide quality services to citizens and various sectors, stressing the importance of continuing to enhance public sector performance.

The King said he is also following progress in the projects unveiled at the London Initiative Conference earlier this year, directing the government to begin the implementation phase and ensure transparency on the financial side.

Moreover, His Majesty underscored the importance of studying the impact of laws, procedures, and decisions, on citizens before endorsing them.

The King called for streamlining procedures for citizens, investors, and companies.

Also during the Cabinet meeting, His Majesty inquired on progress in establishing a unit to coordinate public-private partnership projects, as well as progress in the national strategic infrastructure projects unveiled at the London Initiative Conference, the e-government project, and the railway project connecting the Aqaba Port to the Maan dry port.

The King also asked about the government’s plan to develop and support decentralization, and the planned date to launch a project to empower youth and enable them to start small- and medium-sized projects.

Turning to healthcare, His Majesty posed a question on the planned date to finalize the strategic map of health services to ensure the provision of quality services, also asking when the construction of Salt Public Hospital will be completed.

In addition, the King inquired about the government’s plan to enhance the customs and income and sales tax departments.

Speaking at the meeting, Prime Minister Omar Razzaz expressed appreciation for His Majesty’s close follow-up on programs and projects implemented by the government, affirming the government’s commitment to implementing the King’s directives to enhance services provided to the public while using key performance indicators to measure progress and ensure transparency.

Also during the meeting, several ministers outlined progress in the plans and projects undertaken by their ministries.

Don't forget to set your clocks 60 minutes forward at ....