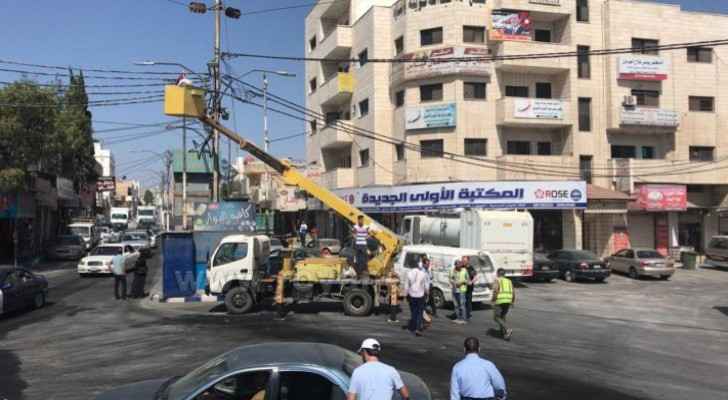 After peace prevailed in the area, the competent authorities started maintenance work and removed the aftermath of the riots on Sunday morning, August 25, 2019, at Ramtha roundabout, following the protests that took place there in the previous two days. The riots broke out in Ramtha following the government's new amendments on the smuggling law, where a number of rioters had closed down roads with burning tires and stones on Friday evening, August 23, 2019.

The amendments indicated that attempting to enter the Kingdom with more than one carton of cigarettes, which includes ten packs, will be considered smuggling.

In a letter issued to the Ministries of Interior and Finance, the government also decided to install gendarmerie forces to protect customs officers from any attack, in addition to installing checkpoints at the Jaber Border Crossing to prevent people from entering any smuggled materials to the Kingdom.

However, for the second day in a row on Saturday, August 24, 019, people in Ramtha have also protested by throwing stones at security vehicles although it was agreed to end all forms of protest and escalation in the area after a meeting of government representatives and a number of dignitaries Ramtha was held.