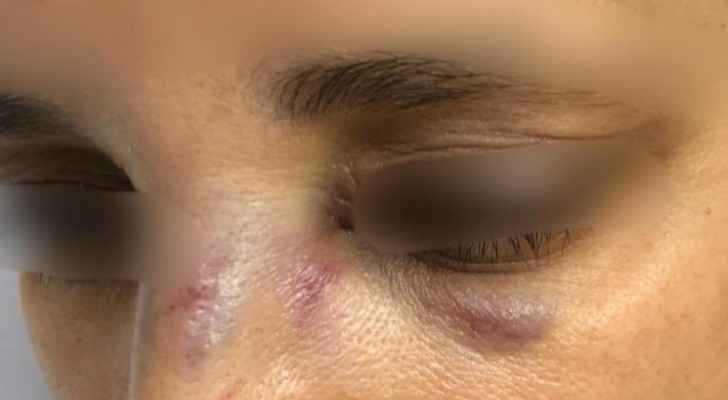 A Jordanian social media user recounted a story of her friend who was severely beaten and abused by her husband.

"I am writing this down and my blood is boiling. Please please read it carefully.

Someone very close to my heart has just escaped an abusive marriage albeit with lots of bruising and a broken nose. This person felt trapped in this marriage for 25 years, every time a bone is broken, she chose time to let it heal, before going back.

Until yesterday, when she finally pleaded for rescue. While the blood was pouring out of her nose, her brothers rushed by her side and wheeled her to a nearby A&E.

Overnight, she was admitted to the hospital and the police and family protection unit were involved. since yesterday; the victim and her children have been dragged from one place to another.

Meanwhile, they arrested her brothers in the hospital after the attacker made a claim against them, while the attacker was set free under the notion that he is a victim as well.

While he was free; he took all her gold, her passport, and her children’s passports.

She went back to FPU and the police station today, repeatedly saying that she is scared for her safety and that of her children’s. Meanwhile the unhappy prosecutor -who has been dragged against his will during the Eid holidays- and who pondered around with her "story," said that since the attacker claims his fist "accidentally" broke her nose, and he (the attacker) has a hospital report against the victim and the victim’s brothers, his hands are tied and there is not much he can do. However, he said, they will keep her brothers -who acted nonviolently in defense of the victim- under arrest.

It took this woman years of abuse to finally come forward, to finally plead for help and ask to be rescued only to feel more in danger after doing so. In coming forward, they put her only defenders behind bars, they dragged her from one center to another in the past 24 hours promising they cannot protect her or her children, shrugging in her fearful face when they coldly told her that her attacker is free.

So I am pleading to everyone I know to raise their voice, please. This is cruel, immoral and under no circumstances should this be our law. Millions of women are currently in an abusive relationship and most of those women do not feel safe to come forward, THIS is why. The law and lawforces are not protecting our women despite claiming they are and this needs to change now.

So please please help me in coming forward together."

Roya could not check with the Family Protection Department on the truth of the story.