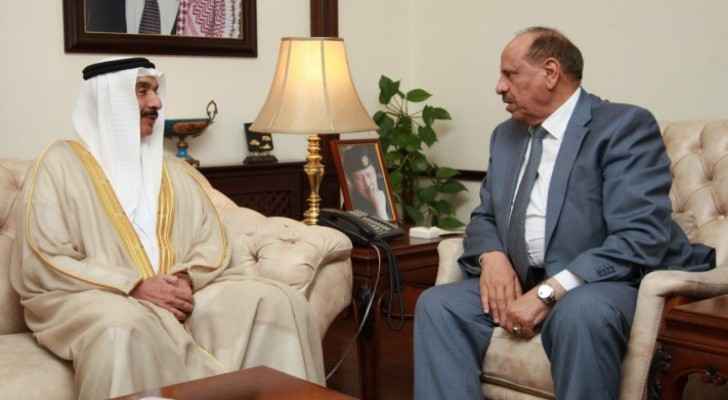 During the meeting, Minister Hammad expressed Jordan's readiness to provide all its expertise and potential in various fields to the Bahraini brothers, saying that overcoming the challenges and difficulties facing the Arab countries requires opening wider areas of cooperation between them and achieving an effective partnership within the framework of joint Arab action.

The meeting also discussed the necessary measures to facilitate joint cooperation between the two countries through finding mechanisms that support economic and security partnership between them, in addition to the reform process in the two countries and the latest developments in the Arab and regional arenas.

Hammad stressed that the deep-rooted relations between the two countries were a natural reflection of the coordination and consultation between the Jordanian and Bahraini leaderships, His Majesty King Abdullah II and King Hamad bin Isa Al Khalifa, which led to firm stances on all Arab, regional and international issues.

For his part, Ambassador Ruwaie affirmed that the existing relations between the two brotherly countries stem from the great joint understanding of various challenges and issues of common interest.

Ruwaie noted that the patronage of the Jordanian and Bahraini leaderships has made the Jordanian-Bahraini relations take an advanced place among the Arab relations, which led to maximizing the achievements and gains that benefit the two brotherly peoples.

At the end of the meeting, the two sides agreed to maintain coordination and consultation on various issues of joint interest.

King swears in Adaileh as Jordan’s ambassador to Egypt

King swears in Adaileh as Jordan’s ambassador to ....

King swears in Adaileh as Jordan’s ....