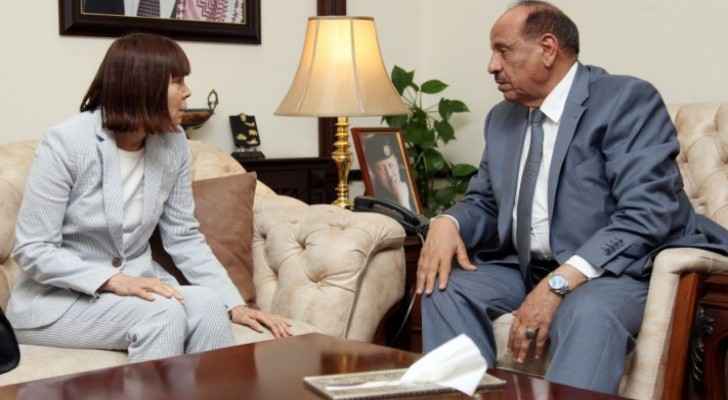 During the meeting held on Wednesday, August 7, 2019, Hammad said Jordan and the United States have close relations in various domains, especially in domains related to security and police, which include training, exchange of expertise and technical cooperation.

Hammad stressed the need to open "wider" horizons through exchanging visits and information to combat crime and terrorism.

He noted that the US support to Jordan and its continuous efforts to bolster stability and maintain security in the region greatly help to put an end to terrorism and extremism and to counter crime, in light of the Kingdom's limited resources, and its endeavors to shoulder the consequences of many regional conflicts to achieve regional and international peace and security.

Hammad presented the most important technical, technological and material needs related to the implementation of the decentralization law.

The Kingdom's reform project seeks to activate popular participation at the local levels based on clear administrative bases in the processes of distributing roles and tasks among local administrations and civil society represented by the elected councils, Hammad pointed out.

The Minister praised the US support for Jordan in implementing its reform programs and development projects, especially in training and qualifying the Ministry's employees.

For her part, Sasahara affirmed her country's support for the Jordanian government's reform efforts in various political and economic fields, praising Jordan's role in bearing the burdens resulting from hosting refugees despite the economic difficulties facing it.

At the end of the meeting, the two sides agreed to continue efforts to enhance cooperation in various fields.