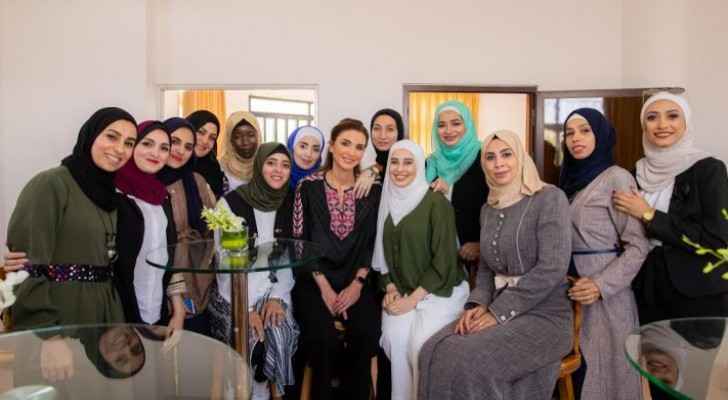 Her Majesty Queen Rania Al Abdullah visited social initiative Recycling for Education in Russayfah on Monday, where she met with a group of entrepreneurs, community activists, and civil society representatives from across the Zarqa Governorate.

Her Majesty joined Russayfah Mayor, Osama Haimour, and Recycling for Education Co-founders, Abdul Rahman Zghoul and Ahmad Thneibat, for a discussion on the initiative’s accomplishments in Jordan and the region, its services, and future plans.

Launched in 2013 with support from the King Abdullah II Fund for Development (KAFD), Recycling for Education began by recycling leftover bread from local hotels, restaurants, and schools. After drying the bread and turning it into animal fodder, the recycled product is sold, and its proceeds are invested and put towards providing scholarships and financial support for underprivileged students and refugees in Jordan.

Zghoul and Thneibat explained that the initiative registered as a non-profit organization in 2017, and has since expanded its operations, creating additional jobs and covering a wider variety of recyclables. It now encompasses four main initiatives, Bread for Education, Paper for Education, Plastic for Education, and Technology for Education, each of which uses different raw materials to produce recycled items that are sold to raise funds for scholarships.

Recycling for Education has also exported its sustainable scholarships operations model to Kuwait, Palestine, and Morocco.

Queen Rania for her part expressed her pride in Jordanian youth and their innovative ideas for how to overcome challenges. She also noted the important role of schools in encouraging recycling, explaining that students are capable of spreading hope by bringing positive habits into their homes.

During a tour of the initiative’s facilities, Her Majesty watched a demonstration of the bread and plastic recycling processes. She also stopped by the initiative’s greenhouse made from discarded plastic bottles, which generates electricity using solar energy.

Recycling for Education received the King Abdullah II Ibn Al Hussein Order for Distinction of the Third Degree from His Majesty King Abdullah in 2017, and has been recognized on the regional level in countries including the United Arab Emirates, Kuwait, and Algeria.

The Queen capped off her visit by meeting with a number of volunteers, social activists, and civil society representatives who contribute to communities in Zarqa through a variety of projects and initiatives. These included representatives from initiatives promoting healthy dialogue, creative expression, and local tourism, as well as small business owners and youth active in anti-bullying efforts and 3D printing.

Man killed in quarrel in Russeifa, three others left ....

Man killed in quarrel in Russeifa, three others ....

Man killed in quarrel in Russeifa, three others ....

Man killed in quarrel in Russeifa, ....