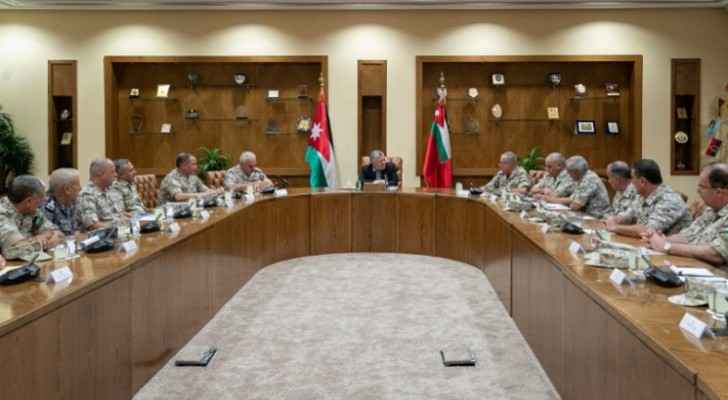 His Majesty King Abdullah, the Supreme Commander of the Jordan Armed Forces-Arab Army, visited on Monday, August 5, 2019, the General Command of JAF, where His Majesty was received by Chairman of the Joint Chiefs of Staff Maj. Gen. Yousef Hneiti and a number of senior officers.

King Abdullah met with Hneiti to discuss a number of operational, training, and logistic issues concerning the JAF.

His Majesty was also briefed by assistants to the chairman of the joint chiefs of staff, the commander of the Royal Jordanian Air Force, and the head of the Royal Medical Services on achievements and future plans related to the JAF.

The King checked on the readiness of JAF formations, commending the personnel’s efforts and expressing pride in their advanced level of armament and training.

The attendees also affirmed the commitment to continue modernizing and building the capacities of the JAF.

His Majesty reiterated his confidence in JAF personnel, stressing the importance of maintaining efforts to continue advancing and modernizing the armed forces so that the army remains a model of discipline, dedication, and professionalism.