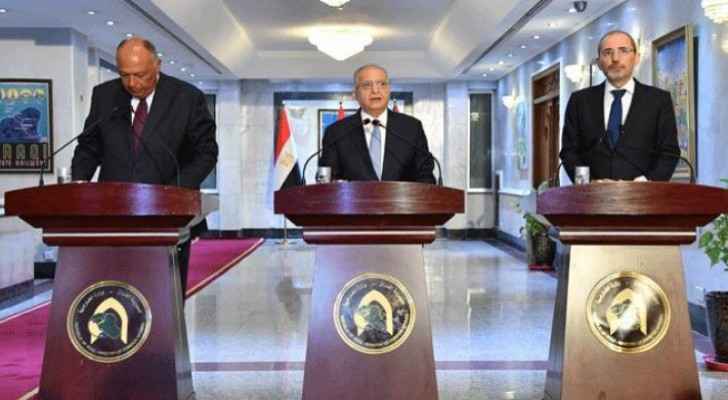 Before the meeting, Safadi conveyed to the Iraqi president a verbal message from His Majesty King Abdullah II stressing Jordan's desire to move forward to expand economic, trade and investment cooperation between the three countries to serve their common interests.

The Iraqi president affirmed his country's appreciation for the Kingdom's role and efforts exerted by His Majesty to promote regional stability.

The Iraqi president stressed that his country wants deeper relations with Jordan in various fields and within the framework of tripartite cooperation with the Arab Republic of Egypt.

The three ministers' meeting underscored the importance of building on the outcome of the trilateral summit that had been recently convened in Cairo with the presence of His Majesty, Egyptian President Abdel Fattah el-Sisi, and Iraqi Prime Minister Adil Abdul-Mahdi to achieve joint goals and serve the three countries.

Safadi told journalists, "We are here to translate the directives of our leaderships to work together within a complementary vision to build relations based on benefiting from the myriad of opportunities that will be possible from working together. We have a future full of opportunities ahead of us with regard to enhancing cooperation and integration in economic, tourism, culture, political and security domains.

Safadi said, "We have spoken about regional issues. Our region is mired in conflicts and crises. We do not need more crises. We need to work together to solve them based on the principles that guarantee stability and security that our countries and peoples deserve."

"The Palestinian cause is our central cause at the Muslim and Arab levels and that there is no solution to this issue except by restoring all the legitimate demands of the Palestinian people, especially its right to freedom and statehood on its national soil on the pre-June 4, 1967 lines with Jerusalem as its capital in accordance with the international resolutions and the Arab Peace Initiative."

"This is the Arab position and this is the vision for a comprehensive peace that we all want and do everything in our power to achieve, which will not last unless the peoples accept it and meet their legitimate rights," Safadi said.

On GCC developments, Safadi added, "We all agree on the necessity of de-escalation through political dialogue that would guarantee regional relations based on mutual respect and good neighborliness and non-interfernce in the internal affairs of other states. Our Arab security is intertwined and any threat to this security is a threat to all of us."

For his part, Egyptian Foreign Minister Sameh Shoukry said, "This visit comes to meet the directives of the political leaderships in the three countries, which emphasize a political will to develop ties at the trilateral level."

"We were entrusted to push forward this cooperation, not only in a political context but also in the context of technical cooperation to support these relations, which will be in the best interest of the peoples in the region."

"The meeting discussed common challenges that face us in the region and the current crises, as well as the need to work together to find solutions and stop foreign meddling in the internal affairs of Arab countries," he added.

The statement also noted that the ministers had discussed the Syrian crisis "and highlighted the need to activate the Arab role in ending the Syrian crisis and reaching a political solution, acceptable to all Syrians, facilitating the voluntarily return of the Syrian refugees."