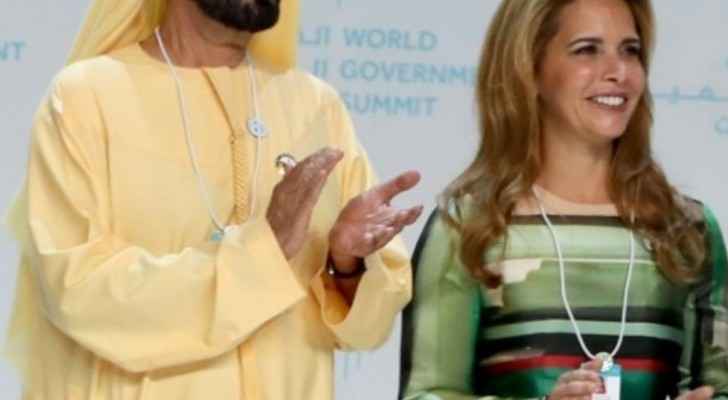 An Olympic horse rider and a trailblazer for women's rights, Jordanian royal Princess Haya has long championed causes close to her heart including youth and education.

In a highly unusual move, the half-sister of Jordan's King Abdullah II attended a London court Tuesday where she is locked in a legal battle with her husband the ruler of Dubai.

The court also heard that her husband Sheikh Mohammed bin Rashid Al-Maktoum, the prime minister of the United Arab Emirates, has applied to the High Court for the summary return of the children to Dubai.

Haya was reportedly his sixth wife, and the 70-year-old prince is believed to have more than 20 children.

Now aged 45, Haya, the daughter of the late King Hussein of Jordan, married her husband in 2004 and told AFP a year later that she believed Emirati women were "an example of a modern Muslim woman".

"In my work and in our family gatherings I have closely been watching women in the Emirates, and I am in great admiration of them... and I never fail to be amazed at the way in which they combine modernity with Arab and Muslim traditions," she said.

"They are proof to me that an Arab woman can be modern without feeling the need to be Westernised."

The princess was appointed a United Nations messenger of peace in 2007, and was the first Arab and first woman to serve as a Goodwill Ambassador for the World Food Programme (2005-2007).

She has long championed women's rights, telling Emirates Woman magazine in 2016 that: "Women need to realise their strength."

"So many great women before us and among us have suffered greatly to carve a place for us in modern society that is today better than yesterday and will be better yet tomorrow if women are allowed to achieve their potential," she added.

Speaking of her husband, she professed: "Every day I am amazed by the things he does. Every single day I thank God that I am lucky enough to be close to him."

She told the magazine that she also enjoyed falconry, shooting and fast cars.

But it was her passion for horses and equestrianism, along with poetry, that united Princess Haya with the Dubai prince.

She headed Jordan's equestrian team before her marriage and remains a keen rider -- something which she has in common with the British royal family, with whom she is reportedly close friends.

Haya became one of the first women athletes to represent her country at an international level, winning a bronze medal at the Pan-Arab Equestrian Games in 1992.

"We share a great passion for horses and equestrian affairs, and that was actually one of the main issues we shared in common when we first met," Haya told AFP in 2005.

"As time passed, we soon realised that we also share a passion for poetry and writing as well, for Muslim and Arab history and culture, and for preserving and enhancing our traditions. Much of both of our work is dedicated to this end," she said.

Late last year, Haya also hit the headlines when she invited former UN human rights chief Mary Robinson to meet with Sheikh Mohammed's daughter Latifa, who was captured at sea in March 2018 after trying to flee the UAE.

In a video uploaded to YouTube in March 2018, Latifa, who was then 32, said she was fleeing mistreatment and restrictions imposed by her father's family.

Issues relating to youth, as well as health and education, are dear to Haya.

"My work in these sectors is another way to ensure that I am in touch with people at the grassroots level, and this is of utmost importance to me," she said.

Her mother, Queen Alia, was killed in a helicopter crash in February 1977 as she was returning from a visit to a health centre in southern Jordan.

In her mother's memory, Princess Haya set up Tkiyet Um Ali in 2003, the first food aid NGO in the Arab world.

Born and raised in Jordan, Haya was educated in elite British private schools and graduated from St Hilda's College at the University of Oxford with a degree in politics, philosophy and economics.