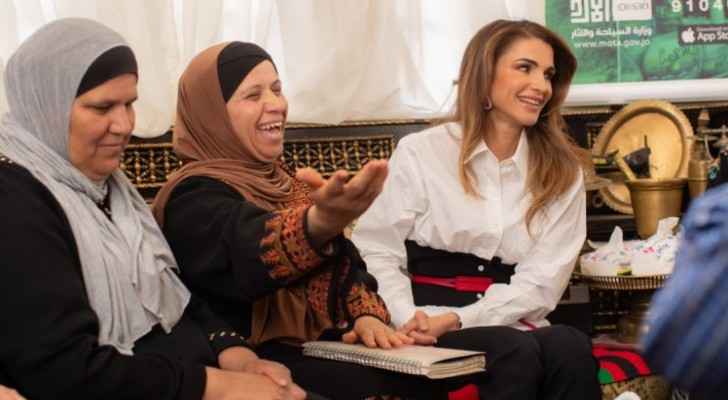 Her Majesty Queen Rania Al Abdullah met with a group of young Jordanian men and women from Salt during a visit to Al Balqa’ governorate on Sunday, July 28, 2019, and learned about their work in the local community.

Her Majesty also met with Fatmeh Al Zo’bi, Um Muhammad, owner and manager of a traditional guesthouse that employs local women, who showed her around the guesthouse and introduced her to employees, a number of whom run their own small businesses.

The female entrepreneurs shared their stories with Her Majesty, detailing the economic benefits of managing self-owned businesses.

In a meeting with a group of active young Jordanians who gathered at Jordan Heritage Café in Salt, Her Majesty heard about their involvement in several local initiatives and contributions to their community and their efforts to boost tourism in the governorate by promoting Al Salt’s heritage and its picturesque destinations.

The Queen then walked along Al Khader Street and stopped by St. George Church, which was built in 1682 and renovated in 2004 by Al Salt’s Christian and Muslim communities.