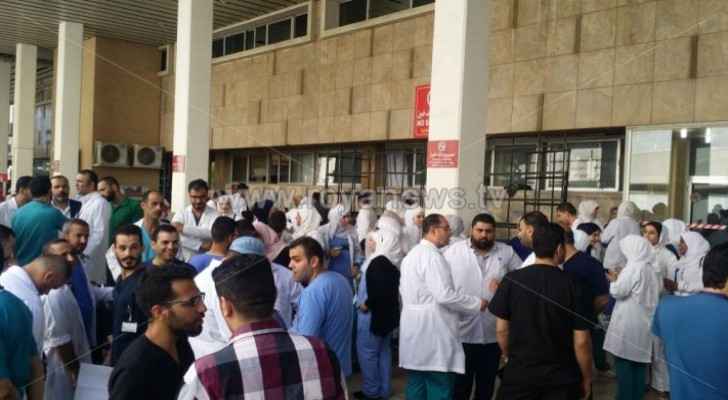 President of the Jordan Nurses and Midwives Council (JNMC) Khalid Rababaa has announced the University of Jordan (UJ) Hospital sit-in dispersal after the JNMC reached an agreement with the Hospital's administration to meet part of the nurses' demands.

Rababaa confirmed in a statement to Roya that a committee has been formed to study the rest of the nurses' demands.

The strike continued for several days, where nurses demanded improved working conditions and increased pay after discussions with the university president "bore no fruits".

Rababa'a earlier denounced the hospital administration's hiring of nursing and medicine students to provide nursing services to patients, saying that this violates laws and threatens the safety of patients, especially since they are not allowed to practice the profession.

For his part, Director-General of the Hospital, Dr. Abdel-Aziz Ziadat said that members of the JNMC and UJ President, Abdul Karim Qudah have agreed on several issues, notably giving nurses who meet the legal requirements the title "legal nurse."

Ziadat pointed out that the Hospital's administration will discuss positively and in accordance with the regulations and laws the rights of workers in the Hospital.

With shortage of staff and equipment, cases surge among ....

With shortage of staff and equipment, ....