Report: MPs, writers are the most to publish hate speech 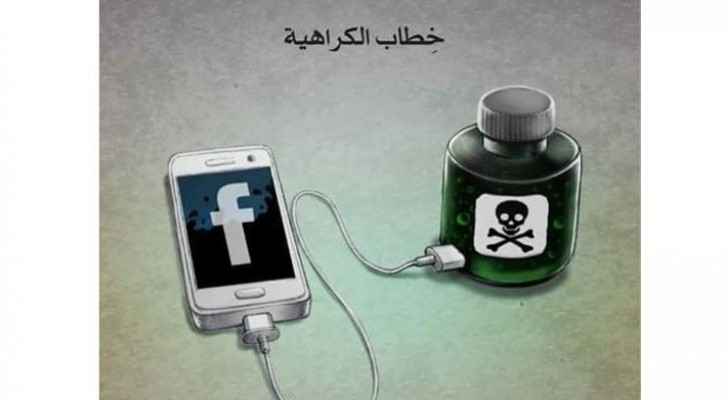 A report issued by the Centre for Defending Freedom of Journalists (CDFJ) on monitoring media in Jordan revealed that media outlets have published about 28 unrepeated hate and incitement speeches during the media coverage of "Jinn" series, which represented 14.8% of the total repeated news articles (the same article was published on more than one news website) of 189 articles.

The report emphasized that journalists and people who work in media were the most to write hate and incitement speeches, as about 11 unrepeated articles, representing 5.9%, were published with such kind of content.

A duplicate article refers to the article that has been republished in two or more media organizations within the monitoring sample. It is noted that the interest of the media in the monitoring sample in writing reports on the series was at its lowest, as only 18 reports were monitored (9.5%) of the total media coverage, followed by press releases (12.7%), 23 articles, and news (18%), representing 34 duplicate articles.

The report also indicated that about 30 repeated articles were published by media outlets.

The report revealed that the number of MPs and officials who published hate speeches was equal to the parties, civil society organizations and intellectuals.

MPs and officials who published hate speeches represented 4.2%, which means that each one of them had published eight articles.

The report adopted the International Bill of Human Rights, the Camden Principles and the Rabat Plan of Action to define the concept of hate speech, emphasizing the lack of a clear concept of hatred worldwide and the difficulty of determining when a speech is considered freedom and when it is considered hatred speech.

The report, the first of a series of monthly reports the Center will issue on this context, recommended the establishment of a media guide to identify words and rhetoric to avoid using them in contexts that might turn them into hate speeches based on the six criteria set by the Rabat Plan of Action, namely the context, speaker, intention, content or form, extent of speech, and ambivalence.

In terms of professional standards, the report revealed that 172 duplicate articles (91.0%) out of 189 were based on known sources, compared to 17 (9%) based on unknown sources.

The report pointed out that it has set four professional criteria to measure the extent of the Jordanian media outlets' commitment to them, namely the known and the unknown sources, the multiplicity of sources, the multiplicity of opinion and the opinion of the other, as well as another independent criterion concerning the obligation to integrate legal treatment in content and media content.

The report showed a clear weakness in compliance with the criterion of the multiplicity of sources, as 14 articles out of 189 repeated articles were committed to the criterion, representing 7.4%.

The report revealed that the media is very weak in providing legal treatment of the issue from a legal point of view, stating that only three duplicate articles submitted legal treatment at a very low rate (1.6%) out of 189 articles.

The report raised the question, "Why media organizations, or even journalists and news editors were not interested in integrating laws and rights into the media coverage of this case? Was it for personal reasons, due to the policy of media institutions, or due to the weakness of the legal knowledge of journalists, editors and media organizations? It also proposed to organize several workshops for journalists and news editors to raise their legal knowledge.

According to the report, media organizations relied on the media coverage of "Jinn series" on the press statements, where 84 repeated articles were monitored, representing 44.4% of the total coverage.

The results of the monitoring revealed that about 136 articles were monitored with a percentage of 77% of the total articles monitored.

The report added that the online media oulets' reliance on replicating what is published on other sites is still large, as media outlets don't edit or develop the content they receive, and they only copy and paste it as it is.

Newspaper journalism always tries to avoid publishing hate speech, while online media outlets are the ones that publish what is considered a hate speech, which calls on those outlets to check on the content before it is published.

The report noted the increasing reliance on social media platforms in the dissemination of news, especially on the online press without verifying the accuracy of what is published.