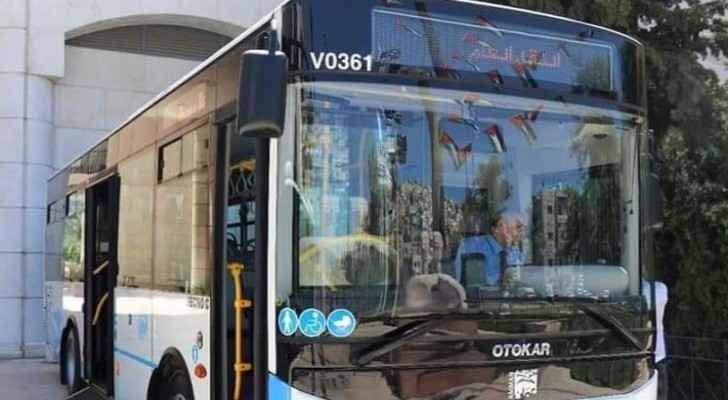 Within the first five hours of the launch of "Amman Bus" project's first phase, about 600 people had used the buses operating through the project, the Greater Amman Municipality (GAM) said in a statement to Roya on Sunday, June 30, 2019.

GAM confirmed that one of the buses had broken down after it was washed, which caused a defect in the gas pedal.

Prime Minister, Omar Razzaz had earlier in the day patronized the launch of the buses operating through the Amman Modern Vision for Transportation Company "Amman Bus."

Razzaz looked firsthand at the specifications and benefits of the buses and the monitoring operations which include monitoring passengers and drivers during the journey through electronic tracking devices installed on all buses at the Operations and Control Department of the General Transport Department at GAM.

PM Razzaz stressed that this leading project is an important step in providing efficient public transport services to citizens, pointing out that the government will work to disseminate this initiative in all governorates to promote this sector and make a leap forward.

During the project's first phase, around 135 transport buses will operate and cover 55 destinations across 23 routes, at a cost of JD 18 million.

The buses will operate at a rate of 16 hours per day from 6 am to 10 pm and will partially operate during holidays.
Modern means of payment will be offered, as people will be able to buy prepaid rechargeable cards which can be obtained from the different points of sale.

During this phase, buses will be transporting citizens from and to 11 areas out of a total of 22 in Amman, including King Hussein Sports City, Abdali, Basman, Tariq, Abu Nsair, Shafa Badran, Sweileh, Jubaiha, Tlaa Al Ali, Al Nasr and Marka.

According to the expansion plans, new buses will be added and equipped through international tenders to secure operating 151 new buses by the end of 2020 with a maximum of 34 new routes.