Protest to be organized today against Jordan's participation in Bahrain workshop

The photo says "No for Normalization" 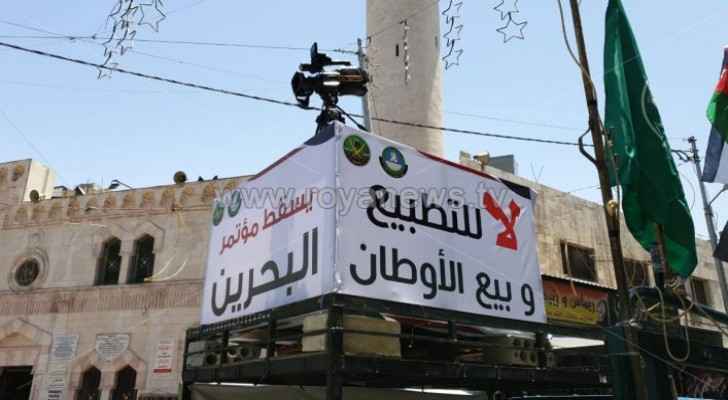 Jordanian political parties have called on all Jordanians to participate in the sit-in organized in protest against Jordan's participation in Bahrain workshop.

The sit-in will take place today at 7:00 pm, in front of the Prime Ministry's building.

In a brief statement, the parties confirmed their rejection of the US peace plan, known as the "Deal of the Century" and Jordan's participation in the Bahrain economic workshop.

The Jordanian Secretary-General of the Ministry of Finance will be representing Jordan at the workshop, the parties said in the statement, stressing that Jordan will deal with any political or economic proposal put forward at the event in accordance with its unwavering principles and will turn down anything that proves inconsistent thereof.

The following institutions, organizations, assemblies and unions will be participating in the sit-in today:

Also read: Syndicates call on Jordanians to participate in protests against Deal of Century, Bahrain Conference

Video: Tens gathered in Downtown Amman against Deal of the Century, Bahrain workshop

Video: Mass march launched from Abdoun to US Embassy in Amman against 'Deal of the Century'