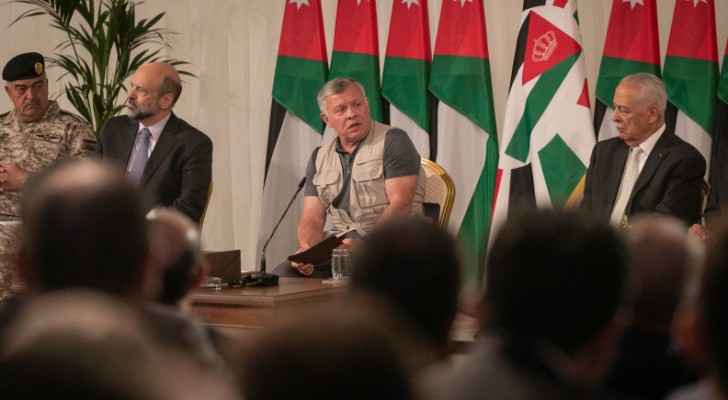 His Majesty King Abdullah on Sunday visited Karak Governorate, where he met with its community leaders and key figures, and inaugurated the expansion of Karak Public Hospital, including catheterisation, cardiac surgery, burns and kidney stone crushing units to improve medical services in the southern region.

During the meeting with community leaders, as part of ongoing outreach meetings to check on Jordanians’ conditions and their needs in terms of services and development, King Abdullah said it was a pleasure to be among the people of Karak.

His Majesty said Jordanians are known for their resilience in the face of challenges, affirming that efforts towards development and progress will continue.

The King said Karak is rich in natural resources and tourist attractions, stressing the need to increase investments in the governorate to generate job opportunities.

His Majesty directed the government to focus on productive projects and to study the potential of utilising fertile state land to assist and support youth.

Discussing healthcare, the King said he is aware of the difficulties facing patients with heart conditions, noting that the Karak Public Hospital expansion enables the provision of catheterisation and cardiac surgery services to serve Karak and the southern region.

His Majesty directed the government and Karak Governorate Council to work out solutions to the issue of the bus compound in the governorate, which cost JD4 million and has been closed for five years.

The King said sound planning is a must, observing that this project wasted many good opportunities, failing to properly serve the public and using up funds that could have been invested in other job-creating projects in Karak.

His Majesty directed the government to visit Karak Governorate and listen to public demands in terms of services, noting the importance of follow-up and identifying the governorate’s priorities to improve economic conditions and combat poverty and unemployment.

For their part, Karak community leaders and figures expressed appreciation for the King’s visit and highlighted the governorate’s economic, service, and development needs.

They commended His Majesty’s steadfast positions on the Palestinian cause and Jerusalem, as well as efforts to promote security and stability in the region.

Speaking at the meeting, Prime Minister Omar Razzaz outlined projects implemented by the government in Karak, stressing that work will continue in coordination with the governorate council based on identified needs and priorities.

Royal Hashemite Court Chief Yousef Issawi said work is underway on a number of new initiatives, including constructing 48 housing units for underprivileged families, a club for veterans, and public parks and playgrounds.

Earlier on Sunday, His Majesty had started his Karak visit by inaugurating the expansion of the 250-bed Karak Public Hospital, which includes catheterisation, cardiac surgery, burns and kidney stone crushing units.