Study: 81% of children in Jordan were subjected to violent punishment 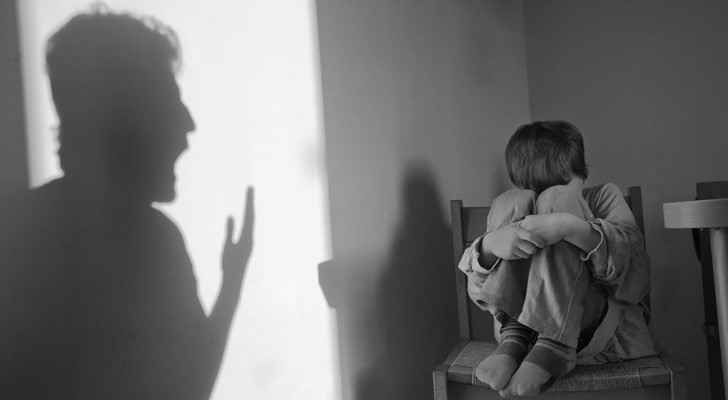 The video which was circulated a couple of days ago that showed a child being attacked by his uncle in Jerash reintroduced the debate about violence against children.

In a report issued in April 14, 2019, the Sisterhood is Global Institute (SIGI) linked the spread of bullying and violence in the society to the violent punishment of children, as the Population and Family Health Survey 2017-2018 showed that 81% of children in Jordan aged between 1-14 years have been subjected violent methods of discipline during the month preceding the survey.

On these methods, the survey found that nonviolent methods included one or more of the following: preventing children from privileges, depriving the child of something he loves, not allowing the child to leave home, explaining to the child that his behavior was wrong, and giving the child something else to do.

However, psychological punishment included one or both of the following: yelling at the child and describing the child as stupid, lazy or any other attribute.

Severe physical punishment included one or both of the following: beating or slapping the child on the face, head or ears, and repeatedly beating the child severely.

Interestingly, the survey showed that only 14% of people whom the survey was conducted on believed that the use of corporal punishment was necessary for the child's upbringing, discipline or education, the majority of them were females (4969 females and 434 males).

SIGI added that this finding confirms that corporal punishment of children, including the severe punishment, is mostly committed by males, and that females tend to use non-violent methods of discipline.

On the other hand, a study conducted by the World Health Organization (WHO) in 2016 identified violence against children and adolescents as "physical and sexual assault, hurting their feelings and ignoring them. While when it comes to infants and young children, it takes the form when children are mistreated by their parents, caregivers or those who have power over them.

As children grow up, peer-to-peer violence becomes commonplace, including bullying, fighting, sexual violence and assaults using weapons such as guns and knives.

International statistics indicated that in 2015, one billion female and male children worldwide were exposed to physical, sexual or psychological violence, meaning that one out of every four children suffers from physical abuse during childhood, and one out of every five girls and one boy out of every 13 boys are exposed to sexual assault and that murders of adolescents are among the top five causes of their deaths.

SIGI noted that the direct potential health effects of violence against children are injuries such as head injuries, fractures, burns or internal injuries, and psychological problems such as suicide, attacks, depression, anxiety or post-traumatic stress disorder, and serious behaviors such as alcohol abuse, smoking and physical inactivity or obesity, and infectious diseases such as sexually transmitted diseases, and maternal and child health issues such as complications of pregnancy and death, including fetal death.

SIGI also calls for holding meetings between various governmental, non-governmental and civil society organizations to discuss and comment on the observations of the Committee on the Rights of the Child and to take action to protect the rights of children by amending legislation, developing policies or changing practices, and the implementation of awareness-raising activities targeting local communities, decision-makers, local leaders and others
SIGI also calls for the repeal of Article 62 of the Penal Code, which authorizes the types of discipline that parents inflict on their children in a manner that does not cause harm to them and in accordance with that the public practice allows.

Article 62 does not take into account the psychological damage caused by the parents to their children which are more severe than corporal punishment.