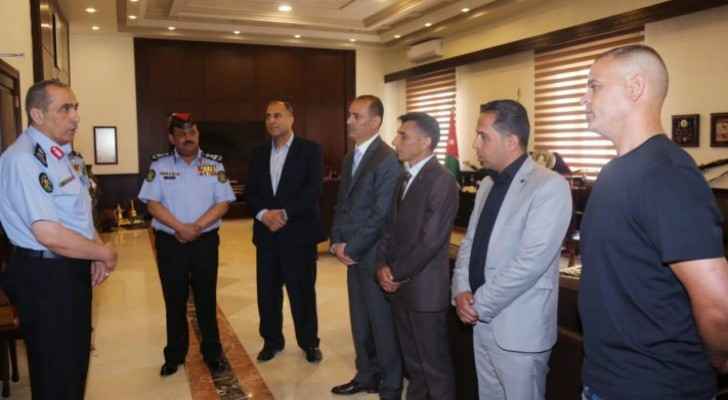 Director of the Public Security Directorate (PSD), Fadel Al-Hamoud honored, in his office, on Thursday, June 13, 2019, a number of members of the Criminal Investigation Department (CID) for their outstanding efforts in arresting, in record time, a thief who robbed five pharmacies in Amman earlier on Wednesday.

After receiving the report about the robberies, road closures were in place and security patrols deployed in the area, which helped the CID members to arrest the robber and seize the amounts of money he had stolen and the firearm that was with him.

Hamoud said that the work done by the CID staff reflects their high level of efficiency and professionalism in performing the duties and tasks assigned to them, adding that the high level they reached in due to the continued training they receive, which helps in raising their efficiency in preserving Jordan's security.

Hmoud added that this effort is a source of pride to all members of the PSD and for every Jordanian citizen, stressing that this honor is an incentive for those "Nashama" to give more and to be more dedicated in their work.