King meets with group of imams, preachers, joins them for iftar

King meets with group of imams, preachers, joins them for iftar 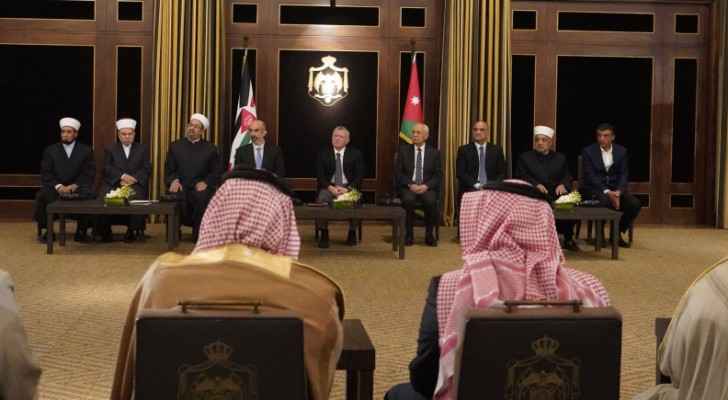 His Majesty King Abdullah on Sunday stressed the great responsibility of imams and preachers in providing guidance and promoting the values of solidarity, compassion, and charity.

During a meeting at Al Husseiniya Palace with a group of imams and preachers from awqaf directorates around Jordan—attended by His Royal Highness Prince Ghazi bin Muhammad, His Majesty’s chief adviser for religious and cultural affairs and personal envoy—King Abdullah stressed the need to apply the teachings of Islam, which is based on tolerance, mutual respect and love.

His Majesty highlighted the noble role and message of imams and preachers, in the service of God, spreading the true message of Islam especially during Ramadan, a blessed month that represents an opportunity to instill positive behavior.

Speaking at the meeting, Awqaf Minister Abdul Nasser Abul Basal highlighted the ministry’s strategy to turn mosques into self-sufficient institutions that support the community in education, healthcare, and social services, in addition to religious affairs, in coordination with various state institutions.

For their part, the imams and preachers emphasized their role in guiding society towards positive behavior, as well as combating malicious rumors that weaken society.

They also stressed the importance of promoting volunteerism to serve society.

The imams and preachers said they also have a role in countering extremist ideology and spreading the values of tolerance and moderation preached by Islam.

They commended the King’s efforts to defend Islam and highlight its true image, lauding His Majesty’s initiatives that call for good deeds, such as the national campaign in solidarity with gharimat, indebted Jordanian women unable to pay back loans they had taken to support their families.

The imams and preachers stressed the importance of the Hashemite Custodianship of holy sites in Jerusalem, noting that they stand with His Majesty’s leadership in defending and safeguarding these holy sites, and expressing pride in the King’s position in support of the Palestinian cause and the legitimate rights of the Palestinian people.

They also spoke about some of the challenges facing imams and preachers around the Kingdom.

His Majesty hosted an iftar in honor of the imams and preachers and joined them in performing maghreb prayer.

This Ramadan, many Lebanese can't afford an Iftar

This Ramadan, many Lebanese can't afford an ....

This Ramadan, many Lebanese can't afford an ....

This Ramadan, many Lebanese can't ....