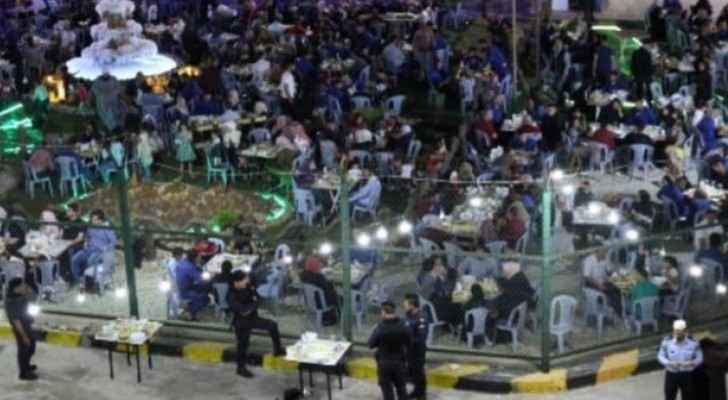 The iftar included play performance by a group of inmates and religious spots.

Colonel Ayman Alawneh, the head of Jwaideh Correctional and Rehabilitation Centre, gave a speech before the attendees on the importance of focusing on the reform programs and the humanization of correctional work.

Alawneh said that although the Jwaideh Center is a center for detainees, a workshop was prepared to train the inmates on the handicrafts of porcelain and mosaics.

He added that a school was also established and courses of literacy and Quran Tajweed and memorization were organized, in addition to courses in computer and English language.

Head of the Centers' Department, Ayman al-Awaysheh, inaugurated the new expansion of Center's garden for special visits, where the iftar ceremony was held.

As Awaysheh inaugurated the Center's control room, which was reinforced by the Department of Information and Communications Technology with new equipment and devices which would provide more control inside the Center.

PSD had launched "My Iftar with my Family" initiative for inmates of rehabilitation centers on Tuesday, May 7, 2019, which included a number of inmates of the Irbid Reform and Rehabilitation Center with their families, in an effort to gather them in Ramadan at a family table.

Also read: PSD launches 'My Iftar with my Family' initiative for inmates of rehabilitation centers