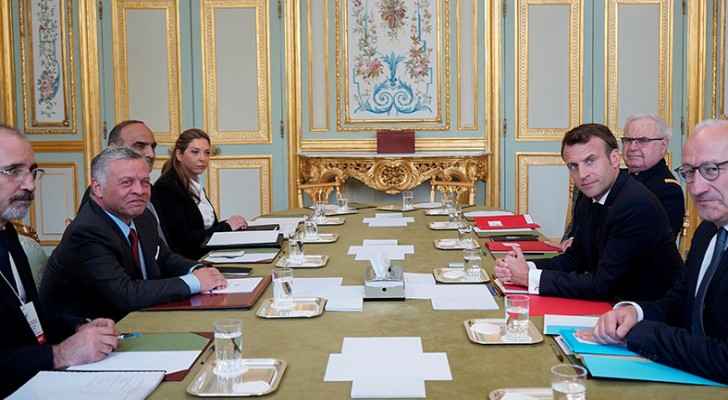 His Majesty King Abdullah and French President Emmanuel Macron, at the Élysée Palace on Wednesday, discussed ways to enhance strategic cooperation between Jordan and France, as well as the latest regional developments.

President Macron expressed appreciation for Jordan’s efforts, led by King Abdullah, to counter extremist ideology and hate speech, and seek regional and global peace and security, expressing France’s interest in supporting the Aqaba Process meetings and maintaining coordination in this regard.

During the meeting, held on the sidelines of the Christchurch Call to Action to Eliminate Terrorist and Violent Extremist Content Online, His Majesty expressed appreciation for France's support for development programs in Jordan, stressing the Kingdom’s keenness to advance economic, investment and trade cooperation with France.

Discussions covered the latest regional developments, foremost of which is the peace process, with the King stressing the need to step up international efforts to achieve just and lasting peace based on the two-state solution, guaranteeing the establishment of an independent Palestinian state on the 4 June 1967 lines with East Jerusalem as its capital.

Efforts to counter extremist ideology and terrorism within a holistic approach were also discussed.

His Majesty thanked President Macron for hosting the Christchurch Call to Action to Eliminate Terrorist and Violent Extremist Content Online.