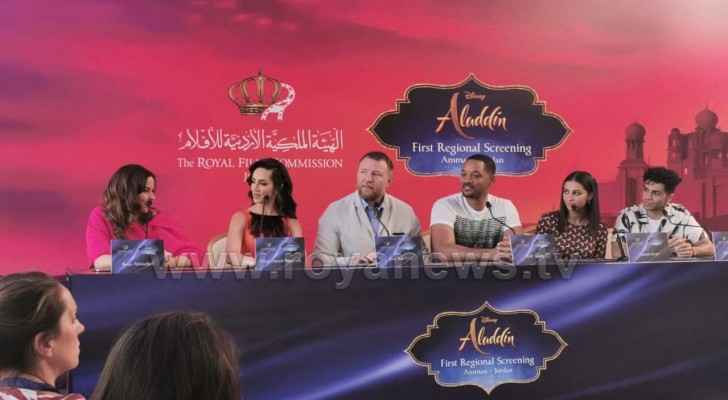 Over 1,000 people watched the thrilling and vibrant live-action remake of Disney’s 1992 animated film, “Aladdin”, in a unique regional advance screening organized by the Royal Film Commission-Jordan (RFC) in Amman yesterday.

The exciting tale of the charming boy from the streets, Aladdin, the courageous and determined Princess Jasmine and the Genie who may be the key to their future was introduced by stars of the movie: Will Smith, Mena Massoud and Naomi Scott, and the movie’s Director Guy Ritchie. The cast visited the Jordanian capital on the fourth leg of their Magic Carpet World Tour, following stops in Paris, London and Berlin.

Prince Ali Bin Al Hussein, Chairman of the Royal Film Commission, said: “It’s a great pleasure to have welcomed everyone to this event and we are immensely proud as the Royal Film Commission and Jordan to have been part of this wonderful Disney production. After all, the story “Aladdin” comes from this region and therefore we are very grateful that the cast and crew have come back to present the film in Amman.”

Will Smith told journalists at a news conference, moderated by Raya Abirached, at the RFC on Monday: “It was important for Guy and myself to tell a story that would be a “love letter” to the region. I was happy to play the role of the genie; the genie being the definition of unconditional love, reflecting what I want to be in life: give gifts and make sure they are not misused. For “Aladdin”, every talent I had cultivated over thirty years had to be used for this film. This was one of the best experiences of my professional career.”

The main advance Gala Screening event took place at Abdali’s state of the art Prime Cinemas in the center of Amman after Iftar, with celebrities greeted by fans on a purple carpet, inspired by the movie Aladdin. Proceeds of the ticket sales for the Gala Screening event are being given to the King Hussein Cancer Center.

Earlier in the day, a private screening of the movie took place, for children from the King Hussein Cancer Center. The young outpatients were surprised at the end of the screening by a visit at the movie theatre by HRH Crown Prince Hussein Bin Abdullah, the director and cast.

“Aladdin” releases in cinemas in Jordan from 23rd May. The live-action “Aladdin” is a more modern and authentic retelling of a Disney classic and draws inspiration both from the 1992 animated classic as well as One Thousand and One Nights, a collection of Middle Eastern stories drawn from folklore and literature.

The movie was partly filmed in Jordan in November of 2017, amid the beautiful landscapes of Wadi Rum and Wadi Disi, with around 150 Jordanian crew and extras working on the production.

Speaking at the news conference yesterday, director Guy Ritchie, who was key in the decision to film “Aladdin” in Jordan, said he is familiar with the topography and geography of the Kingdom. So it was a natural choice to shoot here, but the question was about services, “so all stars aligned that there was really no other choice than Jordan.”

A choice made obvious, as Mary Nazzal-Bataineh Board member at the RFC underlined, thanks to the diversity of the country, the skilled crew, the high quality services and the comprehensive infrastructure, in addition to its incentive package being now taken further. She added: “not only have we been successful in positioning Jordan as the place for film, but we have been also instrumental in achieving a positive social impact on our community.”

“Aladdin” is the most diversely cast Disney movie ever, with the majority of the main cast being from the greater Middle Eastern region. Mena Massoud, who plays the main character of Aladdin, the “street rat” turned Prince, and who is of Egyptian descent, told journalists: “With Aladdin and Will Smith, a dream came true. I hope we will see more and more stories from Egypt and the Middle East (on screen).”

Naomi Scott who is of a mixed Indian-British heritage that allowed her to identify with her character, Princess Jasmine, commented on her character saying: “I felt empowered by the role of Jasmine, who represents a much more modern, strong and ambitious personality in this movie than in the initial one.”

The event was made possible in large part thanks to the support of the Arab Jordan Investment Bank and the Jordan Tourism Board, which works in close cooperation with the RFC to help promote Jordan as a film location.

The RFC was established in 2003 by HRH Prince Ali Bin Al Hussein to support local film makers and help establish a film industry. In addition to screenings and regular workshops offered at all levels of storytelling, filming and production, throughout the kingdom, the RFC works to attract and help support regional and international films use Jordan as a location.

In the past ten years, an estimated 95,000 job opportunities have been offered directly and indirectly linked to films being shot in Jordan.