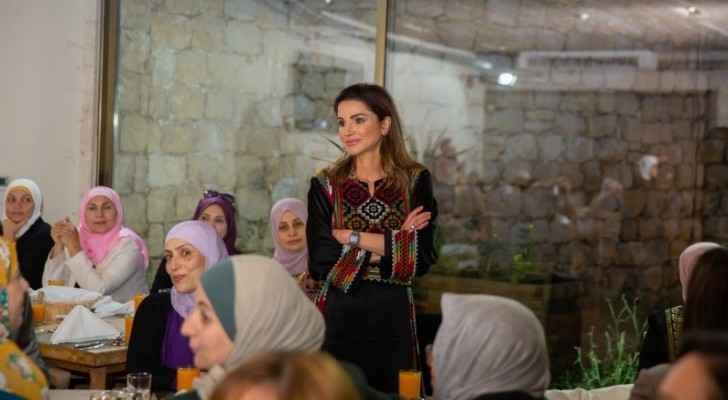 Her Majesty Queen Rania Al Abdullah hosted an Iftar banquet at the Royal Academy for Nature Conservation Restaurant in Ajloun on Tuesday for a group of women active in civil society, education, and volunteer work.

The Queen congratulated the women on the start of the holy month, commending the valuable work they do both at home and in their communities, and thanking them for their generous welcome.

The Royal Academy for Nature Conservation Restaurant overlooks the richest forest in Northern Jordan. It also serves traditional Jordanian food and aims to secure employment opportunities for the local community.

Accompanied by Governor, Ali Majali, and Ajloun Forest Reserve Manager, Othman Al Tawalbeh, Queen Rania stopped by the Soap House at the academy to take a look at its signature Orjan Soap, which is handmade by local women from natural ingredients and oils.

The Queen also saw the Biscuit House, which is owned and managed by local women and produces handmade sweets and biscuits from local ingredients and traditional Jordanian recipes. The house employs a community engagement model that empowers its employees to become entrepreneurs. This model aims to build the capacity of communities in Ajloun, and provide them with expertise to manage and sustain their own small businesses.

Her Majesty then visited the House of Calligraphy, where she learned about the six most famous types of Arabic calligraphy. The house offers visitors a chance to practice drawing their names in a calligraphy style of their choice and promotes dialogue between the local community and people of other cultures, in an effort to support the income-generating activities of local women.

The Royal Academy for Nature Conservation was inaugurated by His Royal Highness Crown Prince Al Hussein bin Abdullah II in 2015 after His Majesty King Abdullah II laid its foundation stone at the Ajloun Forest Reserve in 2010. Considered the first in the region to offer specialized training on nature conservation, the academy was established to help expand the regional training programs offered by the Royal Society for the Conservation of Nature (RSCN).