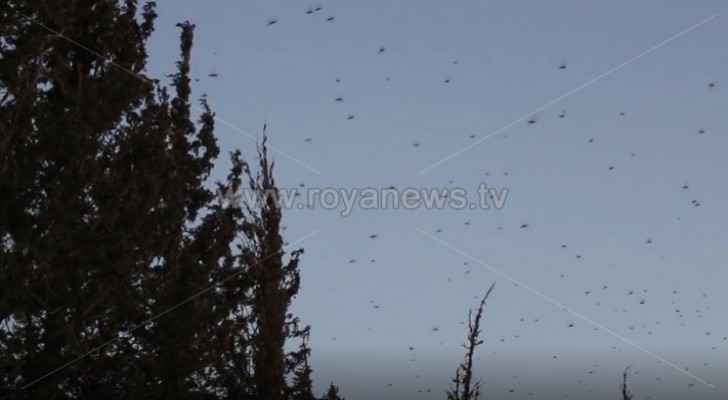 Due to the change in the wind direction to the south, another locusts swarm has entered the Jordanian lands on late Sunday, May 5, 2019, following the first swarm, which entered the area of Manoukh earlier on Sunday, was located on an area of nine square kilometers in Ma'an governorate, and which had been eliminated, the Jordanian Minister of Agriculture and Environment Ibrahim al-Shahahdeh said.

The reconnaissance teams were able to identify the new locusts swarm's location, which was in the Dana Biosphere Reserve in Tafilah governorate, south of Jordan.

Shahahdeh added that at 5 am on Monday, May 6, 2019, and in cooperation with a plane of the Royal Air Force and 10 teams from the Ministry of Agriculture, the locusts swarm will be completely eliminated.

However, the Ministry of Agriculture announced on early Monday that it had launched a campaign to combat the new locusts swarm in al-Barra area of Tafilah, emphasizing that the responsible teams are currently working on eliminating the swarm.

Shahahdeh stressed that no new swarms have entered the Kingdom and that the monitoring process will continue round the clock by the cadres of the Ministry of Agriculture.