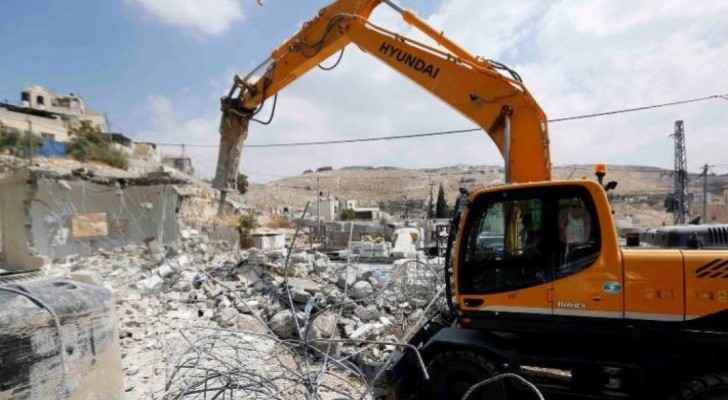 The Israeli Occupation Forces (IOF) demolished on Monday, April 29, 2019, two residential and agricultural facilities in the neighborhoods of Silwan, Jabal al-Mukaber, and Sour Baher, East of Jerusalem, under the pretext of unpermitted construction.

Staff from the Israeli municipality, backed by Israeli forces, stormed several neighborhoods in Silwan, Jabal al-Mukaber, and Sour Baher, and carried out a demolition campaign, demolishing residential and agricultural structures, according to Wadi Hilweh Information Center.

The municipality bulldozers demolished a residential structure made of metals that housed five members of the Jaabis family.

Meanwhile, three rooms with a total area of 150 square meters, a 140 square-meter residential shed, and a 40-square-meter storage shed; all belonging to Imad Abu Sharefeh, were also demolished in the same area.

In Sour Baher, the municipality bulldozers demolished a shed used as an animal barn. A resident was also forced to tear down a balcony at his house with his own hands.

The bulldozers also demolished a parking lot in al-Thawri area of the occupied East Jerusalem neighborhood of Silwan.