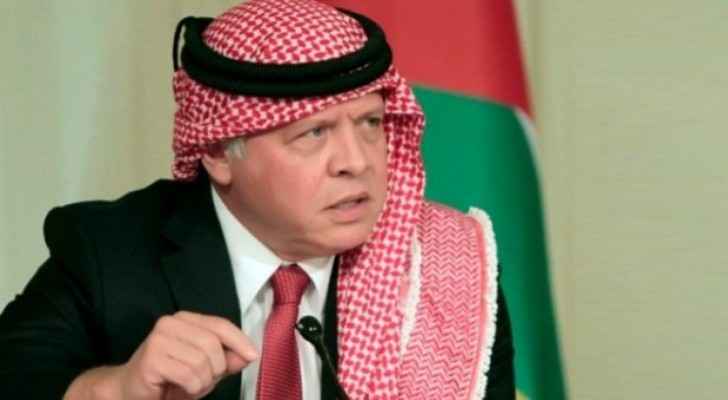 His Majesty King Abdullah II, accompanied by His Royal Highness Crown Prince Al Hussein bin Abdullah II visited on Wednesday, April 24, 2019, Mafraq Governorate and met with the dignitaries and representatives of the Governorate.

During the meeting, which comes within the series of His Majesty's ongoing meetings to Jordanian governorates, His Majesty expressed his pride and happiness in his presence among Jordanian citizens in Mafraq.

King Abdullah also pointed to the challenges facing Mafraq because of the refugees.

"You are under more pressure than citizens in all the other governorates of Jordan. Our people in the northern areas, especially in Mafraq are the most affected by the consequences of the Syrian crisis," King Abdullah stated.

His Majesty said that the Syrian crisis has affected the level of services, employment opportunities and caused high lease rates, which are the current challenges facing citizens of Mafraq.

"I know that there are other challenges, such as the organizational expansion of the city, and the population centers outside the organization, which are not included in the services," King Abdullah added.

His Majesty affirmed that the Jordanian citizen bears the bulk of the cost of the Syrian asylum. "This is not strange to Jordanians, the people of purity and honor," King Abdullah said.

In the same context, His Majesty reaffirmed the need for the government, the provincial councils, and municipalities to work together to address these challenges in a comprehensive manner.

His Majesty also said that the strategic and distinctive location of Mafraq should be used to attract investment, which in turn will contribute to solving some of the challenges, pointing out that Mafraq is an important logistical center.

King Abdullah pointed to developing Jordan's relations with Iraq, which will contribute to enhancing cooperation and activating the joint agreements between the two countries in various fields, and will benefit everyone.

His Majesty directed the government to take a tour next week to Mafraq and prepare a plan within a specific period of time for the development priorities of Mafraq, including the Baghdad Road, and the expansion of the city.

King Abdullah also directed the head of the Royal Hashemite Court (RHC) to visit Mafraq next week with a governmental team to follow up on the development needs of the Governorate, reaffirming that poverty and unemployment are the biggest challenges that require intensifying efforts to reduce them.