Crown Prince meets with leading youth in Irbid, urges them to persist in their determination

Crown Prince meets with leading youth in Irbid, urges them to persist in their determination 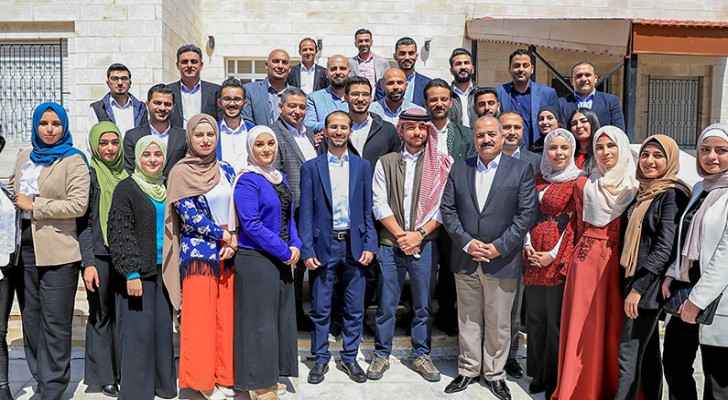 His Royal Highness Crown Prince Al Hussein bin Abdullah II on Tuesday met with a number of young men and women in Irbid Governorate, who have made an impact on their communities through innovative initiatives and entrepreneurial projects.

The youth highlighted their experiences in turning their ideas into projects, in fields such as training, innovation, creativity, and capacity building.

Crown Prince Al Hussein expressed appreciation for the youth’s achievements, noting that Jordan’s future will always be bright thanks to youth like them.

His Royal Highness urged the young Jordanians to persist in their determination and positive spirit, stressing the importance of working together to promote a culture of creativity and productivity.

The Crown Prince also noted the importance of youth-led initiatives in development and job creation, urging the young people present at the meeting to share their experiences and success stories with their peers and communities.

The youth highlighted their projects and initiatives, noting also some challenges facing young people in the governorates.

They called for developing laws to support entrepreneurship and facilitate establishing start-ups, stressing the need to promote the skills needed to utilize artificial intelligence and new technology, while also providing a database of institutions that work with youth to ensure coordination.

The young men and women called for bolstering coordination among the public and private sectors, as well as civil society institutions, in Irbid to support start-ups.

They stressed the need to encourage young people to seek technical and vocational education to ensure that education outputs match labor market needs, calling also for focusing on technology education at schools and universities, and providing training opportunities for youth.

They called for providing platforms to support creativity and innovation in Irbid Governorate to facilitate the establishment of start-ups.

After the meeting, His Royal Highness joined the youth in trying traditional dishes from Irbid.

On 22nd anniversary, Jordan recalls memory of His late ....