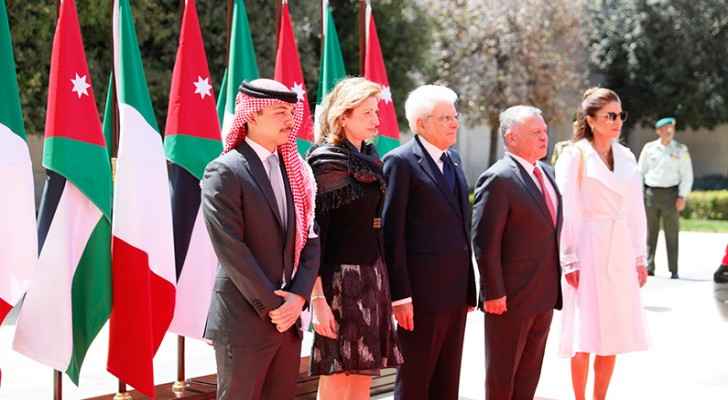 Talks covered the latest regional developments and the importance of maintaining coordination, in pursuit of peace and stability in the Middle East and the world.

In remarks at the expanded talks, attended by Crown Prince Al Hussein and senior officials on the two sides, His Majesty welcomed President Mattarella, noting the strong historical relationship between the two countries, and expressing appreciation for Italy’s support to Jordan.

Italy is a vital economic partner for Jordan, the King said, “but also what binds us together is the challenges of the region, looking at the security and stability of the Mediterranean Basin”.

His Majesty said Jordan and Italy share “strong views on the hope for Jerusalem being a city that unifies all peoples”, describing this as “a very important statement as we move to the future with the challenges that we face in the region.”

The King also commended “Italy’s voice of reason and strength in being able to bring people together”.

For his part, President Mattarella thanked the King for the warm welcome and recalled Their Majesties’ visit to the Quirinal Palace in Italy three years ago.

“I believe that Jordan truly deserves increasing solidarity from the international community and from the EU, in fact, given the significant humanitarian efforts it is putting forth,” the Italian president said, noting Jordan’s efforts in hosting refugees.

“Allow me to express my admiration for how welcoming Jordan has been towards refugees—the Syrian refugees more recently, but also with the Palestinian and Iraqi refugees in the past, and from other parts of the region as well,” President Mattarella added, recounting his visit on Tuesday to the Zaatari Refugee Camp.

“I wish to reiterate, Your Majesty, the fact that the role of the Hashemite Kingdom of Jordan is essential in striving towards peace and coexistence on the religious and cultural sphere. It is an example not just for the Middle East, but for the entire globe,” the Italian president said.

“The symbolic, yet important award you received in Assisi a few days ago, Your Majesty, the Lamp of Peace, testifies to the important role you play,” he added.

“I believe we share a number of common goals and views, such as the ones relating to the Mediterranean region. We strive towards peace, we wish for further cooperation, and for economic and social development,” President Mattarella said.

“This can only be achieved through dialogue, and that is exactly the attitude that you, Your Majesty, and your country, Jordan, have always had,” he noted.

President Mattarella highlighted the strong cooperation between Jordan and Italy, pointing to opportunities to increase it in terms of security and cultural ties.

“Italy wishes to continue supporting Jordan's efforts. In fact, in 2019, we intend to maintain the same contribution levels that we had in 2018,” he added, noting plans for eight loans worth 85 million euros for Jordan, especially for education.

This support is a testament to “our solidarity towards Jordan, something that I believe all countries should share,” the president said.

“I was also pleased, Your Majesty, to hear about a further 3 million euros in grants that Italy will be using to support Jordan—one with the goal of supporting the UN Women project in Zaatari camp; another one which will support the World Health Organisation on the issue of mental health,” President Mattarella added.

Talks covered the peace process, with the King calling for stepping up efforts to end the Palestinian-Israeli conflict on the basis of the two-state solution, leading to the establishment of an independent Palestinian state on the 4 June 1967 lines with East Jerusalem as its capital.

His Majesty stressed the European Union’s important role in this regard.

The King also noted the need to preserve the legal and historical status quo in Jerusalem, stressing that Jordan will persist in undertaking its role in safeguarding Islamic and Christian holy sites, in line with the Hashemite Custodianship.

President Mattarella said the European Union and Jordan share the same position on the peace process and the two-state solution, stressing Italy’s support for the Hashemite Custodianship of Islamic and Christian holy sites in Jerusalem.

Discussing economic cooperation, the president expressed Italy’s interest in increasing the number of tourists to Jordan and encouraging meetings between the private sectors of the two countries, citing plans for such a meeting this month and another one in October to discuss potential partnerships.

President Mattarella also noted the important investment opportunities in Jordan as a gateway into regional and global markets, adding that Italy seeks to make Jordan a gateway for Italian companies into the region.

Discussions also covered efforts to reach political solutions to crises in the region, as well as regional and global efforts to counter terrorism within a holistic approach.

His Majesty hosted a luncheon in honour of President Mattarella and the accompanying delegation.

Earlier, the president and the first lady had been accorded an official welcoming ceremony at Al Husseiniya Palace.

Registering for bread subsidies to ....