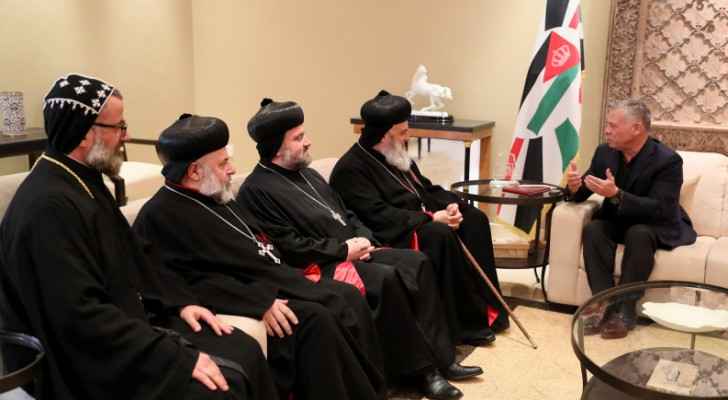 His Majesty King Abdullah on Tuesday received Patriarch Mor Ignatius Aphrem II, Patriarch of Antioch and All the East and Supreme Head of the Universal Syriac Orthodox Church, and his accompanying delegation.

At the meeting—attended by His Royal Highness Prince Ghazi bin Muhammad, His Majesty’s chief adviser for religious and cultural affairs and personal envoy—King Abdullah affirmed that Christians are an integral part of the Arab world, noting that Jordan will continue its efforts to defend church property.

His Majesty reiterated that Jordan will persist in undertaking its historical role in safeguarding Islamic and Christian holy sites in Jerusalem, in line with the Hashemite Custodianship.

For his part, Patriarch Mor Ignatius Aphrem II expressed appreciation for the King’s Custodianship of holy sites in Jerusalem, including the Syriac Orthodox Church.

Royal Hashemite Court Chief Yousef Issawi and Adviser to His Majesty and Director of the Office of His Majesty Manar Dabbas attended the meeting.

Sunday mass to be suspended across churches in Amman

Sunday mass to be suspended across ....