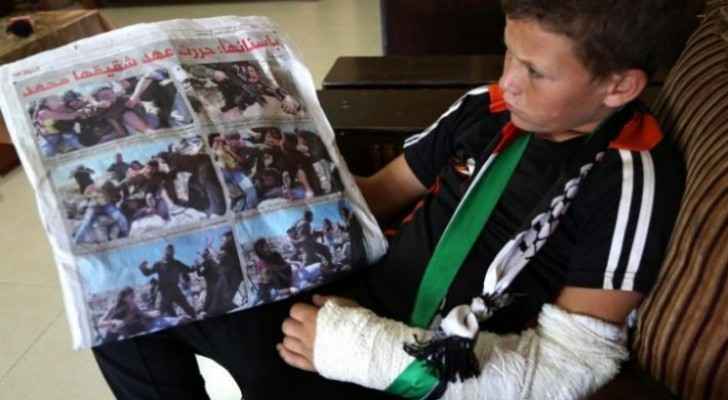 Israeli forces arrested the 15-year-old brother of the Palestinian Protestor Ahed Tamimi, Mohammad Tamimi, on early Monday, April 8, 2019, from his house in Nabi Saleh village, west of Ramallah, in the West Bank.

His mother Nariman Tamimi, who filmed the incident, said that Israeli armed forces raided their house at dawn on Monday, and arrested her son Mohammed.

Tamimi said that the Israeli forces were trying to break her family’s will by detaining Mohammed, noting that her son broke his arm over the weekend while running from tear gas released by Israeli soldiers during the Land Day protests.

The video, which Nariman filmed live on her Facebook personal profile, showed Mohammed surrounded by Israeli armed forces while being arrested. Nariman described the sudden raid as “barbaric.”

The video also showed his 18-year-old sister Ahed shouting at the soldiers and telling her brother to remain silent during the investigation.

In December 2017, his sister Ahed was kidnapped and arrested on “suspicion of attacking an officer and an Israeli Defence Forces’ (IDF) soldier while they were trying to break into her family’s home.
Ahed was released from prison in July 2018 after serving eight months.

His brother, Waed Tamimi, 22-year-old, has been in detention since May 2018 for throwing stones at Israeli soldiers and was sentenced to 14 months in prison.