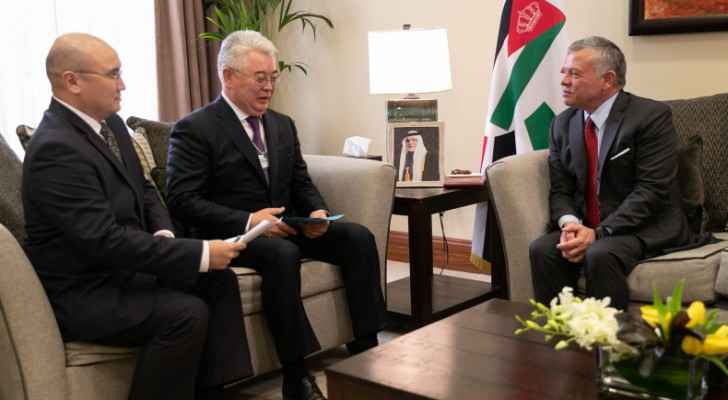 His Majesty King Abdullah, accompanied by His Royal Highness Crown Prince Al Hussein bin Abdullah II, met on Saturday with Kazakh Foreign Minister Beibut Atamkulov, who delivered a letter to His Majesty from the President of Kazakhstan Qasym-Jomart Toqayev.

Discussions at the meeting, held on the sidelines of the World Economic Forum on the Middle East and North Africa, covered bilateral ties, with King Abdullah affirming Jordan’s keenness to build on economic, trade, and investment cooperation with Kazakhstan.

His Majesty asked the foreign minister to convey his greetings to President Toqayev, commending also the efforts of former president Nursultan Nazarbayev in advancing relations.

The meeting tackled regional developments, especially the Palestinian cause, with the King calling for preserving the legal and historical status quo in Jerusalem and affirming that Jordan will continue to defend Islamic and Christian holy sites in the city, in line with the Hashemite Custodianship.

Adviser to His Majesty and Director of the Office of His Majesty Manar Dabbas attended the meeting.