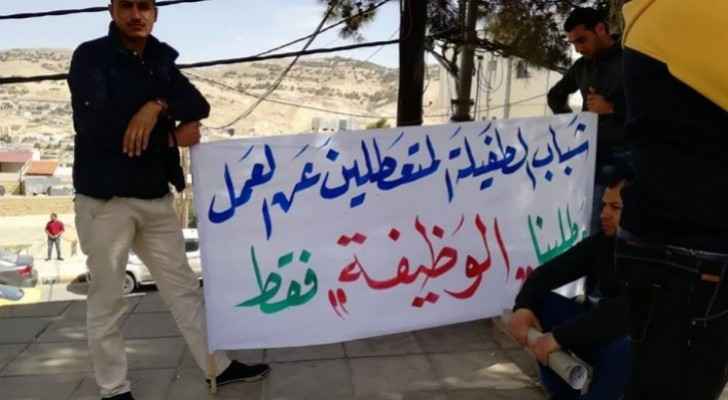 Dozens of unemployed youth from Tafilah have ended the series of protests which lasted for almost 11 days in front of the Royal Hashemite Court (RHC), after concluding an agreement with a committee representing them.

The committee promised to provide them with job opportunities in a number of private companies, institutions, and wind energy projects.

Director of the Labor Department in Tafileh, Atef Haraishat said that the agreement, which was signed with the committee representing the unemployed youth, in the presence of MPs Hassan Al-Saud and Insaf Khawaldeh, included providing youth with 55 job opportunities in wind energy projects and 10 others in operational projects at the Tafileh Directorate of Antiquities.

The committee will seek to offer other job opportunities in some of the ongoing projects in the governorate and will work on the return of those who have been suspended from military service.

Haraishat pointed out that youth will be offered benefits of the health insurance system, social security, and permanence of work, adding that a list of the names of unemployed protesters has been prepared to work on the employment procedures.

Harishat pointed out that in cooperation with various relevant bodies, the Labor Department will provide job opportunities for unemployed youth in the various projects being implemented in order to reduce unemployment among young Jordanians, which exceeded 28%.

A database was also set up about the unemployed persons, where there were found around 4500 unemployed male and female youth.