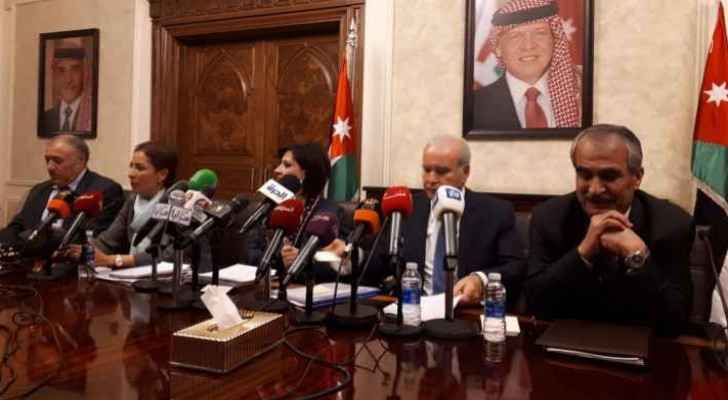 The Jordanian government announced on Wednesday, March 21, 2019, measures it has implemented based on recommendations of the technical, Royal and parliamentary committees to investigate the Dead Sea tragedy, which occurred in October 2018, during which a number of middle-school students, and members of staff, were suddenly engulfed by horrific flash floods.

The announcement was made during a press conference held by Minister of Higher Education and Scientific Research, Waleed Al-Maani, Minister of Interior, Samir Mubaideen, Minister of State for Media Affairs and the government Spokesperson Jumana Ghuneimat, Minister of Tourism and Antiquities Majd Shweikeh, Minister of Health Ghazi Zaben, Minister of Public Works and Housing, Eng. Falah Al Amoush.

The Ministers highlighted key measures that have been implemented by relevant Ministries and government bodies based on recommendations received from the three committees to make sure that such incidents never occur again.

During the conference, Maani said that the Ministry of Education has worked on organizing school trips through issuing amendments to the instructions of trips, reconsidering article 6 of the Education Law.

Maani also added that the school must provide the Directorate with the names of all student to go on the trip.
For her part, Ghuneimat said that the committees formed to carry out investigations into the Dead Sea incident made recommendations that were implemented in accordance with Royal directive to the Government.

She pointed out that many measures have been taken to warn against the danger, such as a number of warning signs in some dangerous areas and near the dams and valleys.

Minister Shweikeh noted that the Ministry of Tourism and Antiquities has reviewed the legislation governing tourism in Jordan, including foundations and terms of trips to valleys, which are currently processed, in order to develop these instructions, and achieve public safety.

Shweikh added that a tourist guide system will be issued so that specialized tourist guides can accompany students during school trips.

Amoush said that his Ministry has worked on training its cadres in the field of aid and emergency and has increased the number of doctors in this specialization to strengthen coordination with Civil Defense cadres in case such accidents occur again and to work in advance on classifying injuries so that the necessary treatment would be provided depending on the nature of the situation.

He added that the ministry has set up a team to provide the psychological support to the victims' families, pointing out that there is a trend to build a sophisticated and developed forensic medical center near al-Bashir Hospital, due to the overcrowding of the Hospital from the inside.

Omoush stressed that the Ministry of Works has offered a number of bids for the bridges located on the Dead Sea road costing JDs 11 million for rehabilitation, maintenance, and restoration, adding that the executing company started executing the tenders.
Omoush noted that the Ministry has set up a committee to check on the bridges in the Dead Sea road and issued a decision to prevent vehicles weighing more than 5 tons from crossing until the maintenance is completed.

In October 2018, torrential rains swept away a group of students and teachers visiting hot springs in the Dead Sea area, leaving some 20 people dead and others injured.