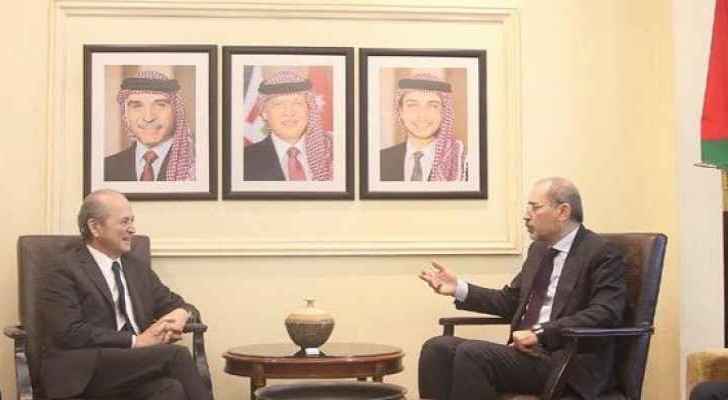 Minister of Foreign Affairs and Expatriates Ayman Safadi discussed on Tuesday with French President Emmanuel Macron's Personal Representative in Syria Francois Sinimo efforts to resolve the Syrian crisis and mobilize support for Syrian refugees and the countries hosting them.

The talks were to follow up on "the positive" outcome of a conference held in Brussels last week organized by the European Union and the United Nations on Supporting the Future of Syria and the Region.

Safadi and Sinimo agreed to pursue coordination, both at the bilateral level and through the Small Group on Syria, to intensify efforts to reach a political solution to the Syrian crisis in line with resolution 2254 that preserves Syria's unity and paves the way for the voluntary return of refugees to their country.

They also reaffirmed their support of UN envoy to Syria Geir Pederson's efforts to make progress towards a political solution to the crisis.

They pointed to the importance of international cooperation and coordination to combat terrorism, which had suffered territorial losses in Syria and Iraq, but still poses a security and ideological threat.

Safadi briefed the French envoy on the pressures that the Syrian refugee crisis placed on Jordan's vital sectors, and Sinimo commended the Kingdom's humanitarian role toward the displaced Syrians.

The foreign minister and the envoy praised the outcome of the Brussels III Conference on Supporting the Future of Syria and the Region, which pledged seven billion dollars in international aid to refugees and the host countries, stressing the importance of the Jordanian-French partnership in enhancing security and stability in the region.