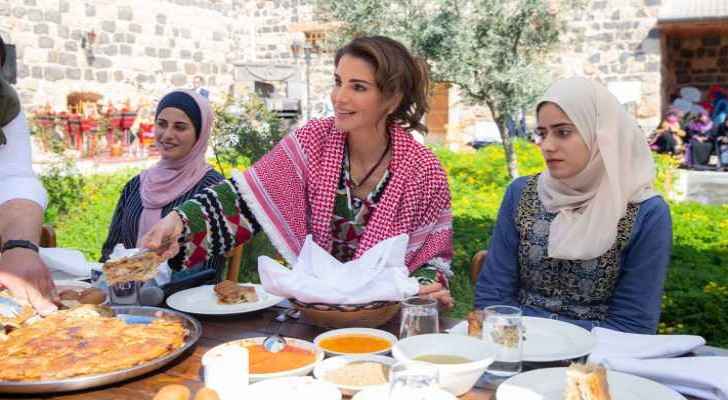 Her Majesty Queen Rania Al Abdullah expressed her gratitude towards all Jordanian volunteers for uplifting the nation during a meeting with members of Muhafazati Volunteering Foundation and beneficiaries at Dar Al-Saraya Museum in downtown Irbid, on Monday, 18 March.

The Queen relayed His Majesty King Abdullah’s regards to the people of Irbid, highlighting their notable contributions to Jordan’s development in countless fields and their generosity and keenness to support others.

Muhafazati is a non-profit organization that aims to empower Jordanian youth and foster active citizenship, that promotes young people’s involvement in volunteering and awareness-building activities, in addition to helping them become active and socially conscious members of society.

Commending the major role that Muhafazati and other Jordanian youth volunteer groups play in uplifting the nation, Queen Rania explained that Jordan’s economic hardships can only be overcome through solidarity and hard work.

"Your work has helped close the gaps and end the isolation of different segments of society, bringing everyone closer together," Her Majesty said.

During the meeting, Muhafazati Founder, Abdullah Bani Hani, explained that the foundation connects youth with local organizations to increase their engagement in issues relating to their own communities. noting that establishing a culture of volunteerism among Jordanian youth boosts their self-confidence and strengthens their sense of belonging to their country.

Queen Rania listened to a number of youth, who shared their firsthand experiences of how Muhafazati’s skill-building and networking activities helped them find jobs and launch small income-generating projects of their own. In turn, Her Majesty affirmed that all youth have the right to work and underscored the importance of engaging with young people to identify the skills demanded by the labor market and help them acquire them.

Her Majesty explained that, in addition to the need to create more jobs for youth, another challenge Jordan faces is the spread of misinformation and rumors, which can lead to widespread negativity, impact Jordan’s investment environment, and cause citizens to lose faith in themselves and in the country’s institutions.

She added that young people can play a role in refuting rumors by raising awareness and correcting misinformation.

The Queen also noted that Jordanians’ achievements and skills, which have enabled them to overcome many hardships, are often overshadowed by negativity, nevertheless, Jordan and its people are respected around the world for all that their young men and women have accomplished in spite of the country’s limited resources.

Following the meeting, Queen Rania also met with a group of female beneficiaries of Muhafazati’s ‘Hirfati’ initiative, which trains underprivileged women to create and market their own handicrafts. The women explained to Her Majesty how gaining marketing skills and achieving economic empowerment has allowed them to improve their families’ living standards.