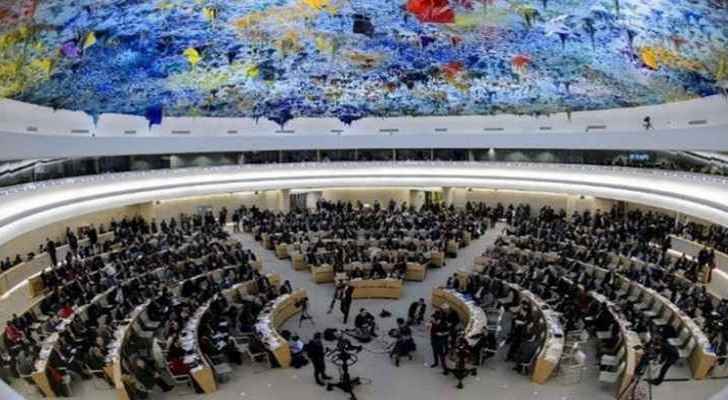 Jordan presented the final list of recommendations it supported during its third cycle of the Universal Periodic Review (UPR) under the auspices of the Human Rights Council in Geneva on Thursday, March 3, 2019.

The Kingdom received 226 recommendations from 91 countries last November and initially supported 131, noted 74 and left 21 under consideration until the adoption of the final report in March. The third cycle of the Review for Jordan was preceded by cycle one and two taking place in 2009 and 2013 respectively.

This time, Jordan accepted 16 of the 21 “under consideration” recommendations in addition to two recommendations it had previously “noted”, bringing the total number of supported recommendations to 149 out of 226. The 66 percent acceptance rate in the third cycle is lower than the 76 and 73 percent Jordan has boasted in the past.

Additionally, there were some issues that received attention for the first time, namely the environment, business and human rights, human rights defenders, and counter-terrorism.

The opening remarks during the adoption session were delivered by Saja Majali, Permanent Representative of Jordan to the UN, followed by a video message by Moussa Burayzat, Head of the National Centre for Human Rights (NCHR). According to the NCHR:

“The government of Jordan is generally mindful of its human rights obligations. Violations emanating from police practices or governmental policies are usually dealt with in a satisfactory fashion. However, HR violations continue to occur, and complaints sometimes go unheeded. Concerns in this regard include treatment of detainees and inmates at police stations and prisons include the alleged use of torture. Jordanian government has acted upon a number of the recommendations put forward by both UPR and NCHR, mainly in the area of reforms of judiciary and women’s rights. Government’s effort to combat rising figures of poverty and unemployment have been insufficient. Infringement of civil and political rights remain a most pressing question; right to peaceful assembly and protest has been observed in principle but not without undue restrictions in certain instances. Dozens of people were apprehended detained and/or jailed, received jail sentences by state security court and governance have more than once prevented the holding of peaceful activities, usually on flimsy grounds. Certain provisions of the press publication law, anti-terrorism law, the penal code, criminal prevention law give authorities enough latitude to jail persons for acts which are normally regarded as freedom of expression. The incumbent government has generally displayed a more forthcoming attitude toward public protest, freedom of expression, including addressing some laws relating to the right of information and activity of civil society. Yet, it has recently allowed the passing of parliament of a restrictive labour law. Finally, a respect for NCHR independence, financial resources have been honoured by the government.”

Jordan’s full session can be viewed on the UN channel here.

Jordan’s 3rd cycle UPR report can be accessed through the OHCHR’s website here.

The recommendations that Jordan received in previous cycles can be found on this database.

Below are the 21 recommendations Jordan deliberated whether to support after its UPR session in November 2018. The third Review of Jordan was marked with higher government cooperation with Jordanian grassroot organizations, especially coalitions, in the period leading up to the submission of the national report and after the November session.

According to Majali’s opening remarks, “the government consulted with all stakeholders, including the representatives of the civil society. This was an important stage for us and the review and the contributions we received made it possible to form our final position”.

The supported UPR recommendations give the civil society a common platform and a channel of of dialogue with the government in order to advocate and implement reform that has been deemed necessary before Jordan’s mid-term review in May 2021 and its next UPR review in November 2023.

The UPR is a unique process which involves a periodic review of the human rights records of all UN Member States and is based on equal treatment for all countries. It provides an opportunity for all States to declare what actions they have taken to improve the human rights situations in their countries and to overcome challenges to the enjoyment of human rights.

The ultimate goal of UPR, according to the HRC, is the improvement of the human rights situation in every country with significant consequences for people around the globe. To achieve this, the UPR involves assessing States’ human rights records and addressing human rights violations wherever they occur.