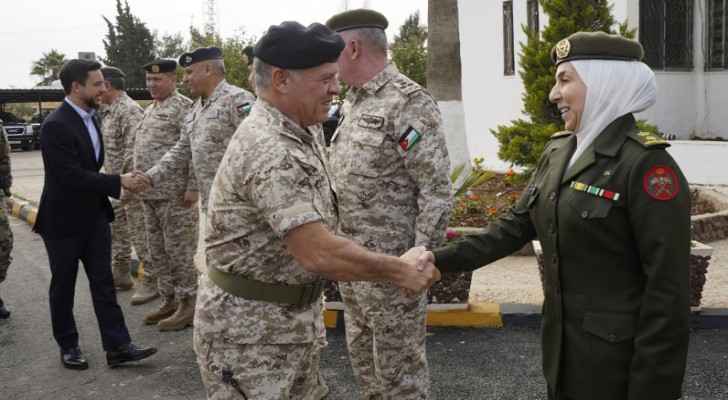 His Majesty King Abdullah, the Supreme Commander of the Jordan Armed Forces-Arab Army, accompanied by His Royal Highness Crown Prince Al Hussein bin Abdullah II, was briefed on Tuesday on the achievements of women in the JAF.

During a visit to the JAF Music Band headquarters ahead of International Women’s Day, King Abdullah inspected several military formations made up of women officers, including personnel from the Royal Medical Services, the Royal Jordanian Air Force (RJAF), the JAF Music Band, and the Sheikh Mohamed bin Zayed Brigade/Quick Reaction Force.

His Majesty was received by Chairman of the Joint Chiefs of Staff Lt. Gen. Mahmoud Freihat and was briefed on women’s work in the JAF, where they have been serving since 1950.

The King commended the achievements of Jordanian women in all fields, praising their pioneering role in the JAF.

During the visit, His Majesty watched a live feed of a military drill conducted by women personnel.

In addition, the King toured the crèche at the JAF Music Band headquarters for personnel’s children.

Also during the visit, two helicopters piloted by RJAF women personnel flew over the military training field, and His Majesty spoke to one of the pilots mid-flight via video call.