Syrian refugees burn what possessions they have left to stay warm

Syrian refugees burn what possessions they have left to stay warm 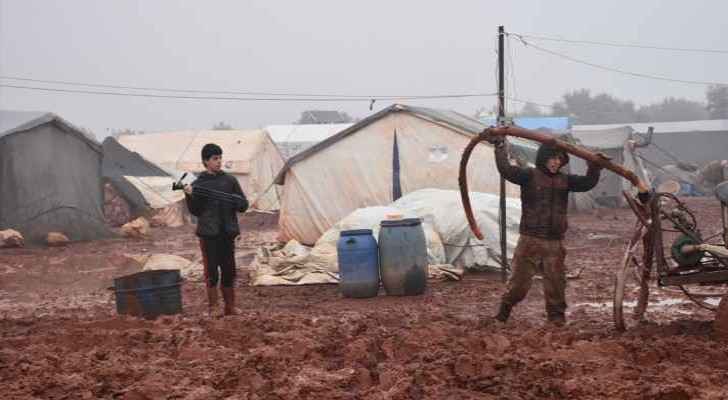 At a time when the political solution to the Syrian crisis is still unsolved, thousands of displaced Syrians continue to suffer at home and abroad, especially with the cold weather in winter.

The continuous rainfall and low temperatures have made living conditions difficult in the camps, almost impossible. The lack of fuel and the difficulty of obtaining it in these weather conditions has forced hundreds of families in the Syrian Idlib refugee camps to set fire to their own possessions, for a sense of a fleeting warmth, otherwise they may die of the freezing cold.

According to Turkish Anadolu Agency, Um Khalaf, a mother to 10 children expressed her overwhelm on a daily bases as she finds nothing to set on fire to protect her family against the cold.

"We did not receive winter clothes, and now we have to set fire to our own ragged clothes and shoes and plastic necessities to feel warm."

"It's not just fuel, the camp is drowning in the mud because of the rains. We have nothing to eat or drink, and we cannot go out to find what we need in these circumstances." said Umm Yaseen, another refugee in the camp.

Sobhi and Daha said that they were forced to go walking in the mud a kilometer to get some bread, but in the end even the animals refused to eat the mud-stained bread.

Little Amani said she feels sharp chills overcome her body every night as she tries to fall asleep in the freezing tent, along with her seven brothers.

Eight arrested in connection with burning of Syrian ....

Eight arrested in connection with burning of ....

Eight arrested in connection with burning of ....

Eight arrested in connection with ....